The Melvins: The Bulls & The Bees (and the car business, apparently)

- February 24, 2012
The Melvins will be releasing a new EP in March titled, The Bulls & The Bees, brought to you by Scion A/V, which is the "sponsorship of America's Musical Underground" branch of Scion, which is the "sell a car" branch of the automobile industry.

I guess I can get behind any presence that encourages, promotes and exposes what would otherwise be considered non-commercialized, non-funded arts and music, even if it's done so with corporate sponsorship. Not sure if this really works from an integrity standpoint, but The Melvins are releasing an EP thanks to Scion A/V's backing. Maybe the ends justify the means. I know one thing:  Only a new release from The Melvins could get me to throw any ink toward Scion, so I hope they appreciate it.  Not that they, y'know, read me or know of my existence or anything.

The Bulls & The Bees will be available as a free download upon its release.  The Melvins' new single, "The War On Wisdom," is now streaming over at Pitchfork (yay). I can't imagine this song is going to be pumping out of too many Scion speakers this Summer, but... you never know.

All info is courtesy of Speakeasy PR.

The Melvins' 2010 release, The Bride Screamed Murder, was reviewed at No Ripcord. 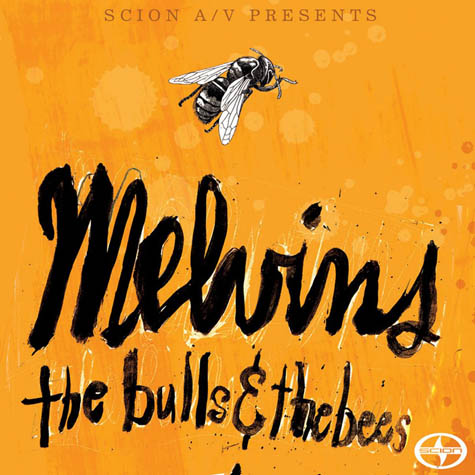 Feb. 23, Torrance, Calif. -- Scion A/V has partnered with the Melvins for an EP titled Scion A/V Presents: The Bulls & The Bees, a five-song collection that marks the band's first original material since their 2010 album The Bride Screamed Murder. The release will be available as a free download on Mar. 13 via Scionav.com with "The War On Wisdom" streaming this Friday on Pitchfork.com.

The Melvins formed in 1983, kicking off what would be a seismic shift in heavy music and focusing the epicenter of modern music firmly on the Pacific Northwest for the next decade plus. The band blended punk, metal, hard rock to create a new subgenre that has been tagged with a variety of labels including sludge, grunge and doom and won a cult of fans that have yet to waiver some twenty-nine years into the band's career. Buzz Osborne and Dale Crover have been the band's constants (Crover joined in 1984) with Big Business' Jared Warren and Coady Willis joining the band in 2006 for (A) Senile Animal.
"The Melvins have remained such a consistent presence in heavy music," says Jeri Yoshizu, manager of sales promotions for Scion. "It's an honor to have them create an original release for Scion A/V."

For More Information About The Melvins Go Here:
www.themelvins.net

The EP release will be followed by a 21-date U.S. trek that kicks off on Apr. 11 at The Blank Club in San Jose, Calif. and wraps up exactly a month later on May 11 at The Galaxy Concert Theatre in Santa Ana, Calif. Dates are:

About Scion:
Scion, from Toyota Motor Sales (TMS), U.S.A., Inc., was developed with a new generation of youthful buyers in mind. Scion’s mission is to provide distinctive products, the opportunity to personalize, and an innovative, consumer-driven process at the retail level. The brand features four groundbreaking models with a wide array of standard features: the xD urban subcompact five-door, the iconic xB urban utility vehicle, the tC sports coupe and the all-new premium micro-subcompact iQ. The Scion brand often applies new practices in all aspects of its business and pushes the creativity envelope with non-traditional advertising and marketing to engage young consumers. Scion also supports originality through its programs in the artistic community. For more information, visit www.scion.com.scion.com.