- February 27, 2012
It's only been days since covering news of the upcoming Melvins EP, The Bulls & The Bees. As The Melvins do tend to employ a work ethic that leads to both an admirable and prolific stretch of creativity and an annoying spring of recorded excess that's damn near impossible for completists to follow, news of Melvins Lite comes as a "really?" to anyone even somewhat knowledgeable as to degree of the band's output. To delve into their catalogue is to dive headfirst into a deep chasm of recorded work from which you MIGHT successfully emerge, provided you're obsessed, well-researched and wealthy. Even then, I imagine it would take years to acquire all their work as the various offshoots, projects and permutations churn out music with enviable gusto.

So, Melvins Lite is comprised of mainstays Buzz Osbourne and Dale Crover, combining efforts with the amazing Trevor Dunn (Mr. Bungle, Fantômas).  Their new album, (a long player), Freak Puke, will be out June 5th via Ipecac Recordings.  Dunn is also working on Tomahawk's upcoming new album, Eponymous to Anonymous, which is supposed to be out this April.

Below are details on the new release and recapped info for The Bulls & The Bees EP, released by the Big Business-addled four-man permutation of The Melvins.  THAT's the version that will be on tour.  Confused?  You're not alone. 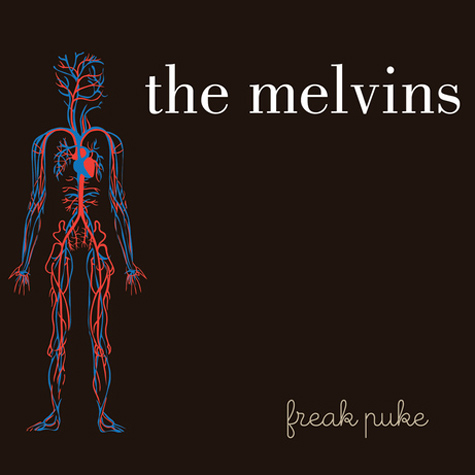 "The Melvins have a long history of mixing up our line-ups and I think that's what has kept us relevant for so long," explains Osborne. "Consider the Freak Puke record the fifth side of the four-sided Melvins' triangle."

Dunn is known as one of rock and jazz's top bass players, performing on both a traditional and upright bass in a wide range of bands and as a freelance musician. He is currently recording the new Tomahawk album, is a member of Fantômas and was the bassist for Mr. Bungle.

The Melvins will be taping an episode of Last Call with Carson Daly at their Apr. 13 show in Los Angeles. Osborne will join Greg Gutfeld for another chat on June 28 on Fox News' Red Eye.

Freak Puke was recorded by Toshi Kasai and the Melvins in Los Angeles.

As previously announced the Melvins (as their "traditional," four piece line-up with Crover, Osborne and Big Businesses' Jared Warren and Coady Willis) will be touring the U.S. this Spring in support of the free EP release: Scion A/V Presents: The Bulls & The Bees, available Mar. 13 at ScionAV.com. Dates are listed below. A Melvins Lite tour is forthcoming.