fIREHOSE: "Flyin' The Flannel" & "Down With The Bass"

- March 03, 2012
A couple weeks ago, I touched upon the upcoming fIREHOSE reunion and their supporting tour.  A few days ago, I received word of a new compilation of fIREHOSE material being released called, "lowFLOWs:" The Columbia Anthology ('91 - '93). 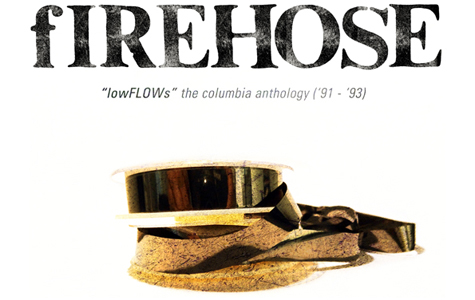 Once again, Philadelphia is out of the running.

Influential three-piece band fIREHOSE will reunite in April for their first tour dates together since 1994, an historic rock event that will be celebrated with the release of their first major collection ever, "lowFLOWs": the Columbia anthology ('91 - '93). Chronicling the final three-year arc of bassist mike watt, singer/guitarist Ed Crawford, and drummer George Hurley, this 2-CD, 45-track package weighs in with the two original fIREHOSE albums on Columbia Records (1991's Flyin' the Flannel and 1993's Mr. Machinery Operator) plus 44 minutes (15 tracks) of out-of-print and previously unreleased recordings. With liner notes written by best-selling rock author/critic Michael Azerrad, "lowFLOWs" will be available at all physical and digital retail outlets starting April 3rd through Columbia/Legacy, a division of SONY MUSIC ENTERTAINMENT.

Two days later, on Thursday, April 5th, the reunited fIREHOSE will kick off a 13-city West Coast tour at Harlow's in Sacramento. The 16-day tour will wrap up on April 20th at the Coachella Festival in Indio, California, the second of two dates at the festival for fIREHOSE. Please see complete tour dates below.

Two decades after their initial releases on Columbia Records, Flyin' the Flannel and Mr. Machinery Operator crackle with the same authoritative energy and political savvy that they were credited with in the early '90s. Remastered for the first time, they demand to be heard again, for their fusion of punk, funk, free jazz, and carnal rock audacity. Flyin' the Flannel's 16 tracks open Disc One of "lowFLOWs", followed by "Max and Wells" from the long out-of-print soundtrack of the 1990 college protest movie, A Matter of Degrees, the track named for the two principal characters in the film. Next is a previously unreleased instrumental version of Flyin' the Flannel's opening song, "Down with the Bass."

Disc One closes with all seven songs from the Live Totem Pole EP, recorded at the Palomino Club in North Hollywood on August 16, 1991. With the exception of the mike watt compositions "What Gets Heard" and "Makin' The Freeway," the EP tunes are covers that show off the breadth of fIREHOSE's interests, from Blue Öyster Cult ("The Red And The Black") and Public Enemy ("Sophisticated Bitch"), to the Butthole Surfers ("Revolution (Part Two)"), Superchunk ("Slack Motherfucker") and Wire ("Mannequin").

Similarly, Disc Two of "lowFLOWs" opens two years later with the 14 tracks of Mr. Machinery Operator, before moving into six rarities. These start with an instru­men­tal version of the Mr. Machinery Operator track "Blaze" (from GeNrECidE: A Compilation), and the promo single "Mersh Again Edit" of the Mr. Machinery Operator track "Witness." The final four tracks, "4. 29. 92," "Powerful Hankerin'," "Tien an Man Dream Again," and "Formal Introduction" were all recorded live at Electric Lady Studios in New York City and broadcast live on March 15, 1993, for The Columbia Records Radio Hour. The first three are previously unreleased, and the fourth was only briefly available on a promo EP, Big Bottom Pow Wow.

Before Nirvana flew the flannel, before Seattle, before indie alt-rock even had a name, there was the MINUTEMEN from L.A.'s San Pedro district, a band whose name is spoken in reverential tones wherever and whenever serious rock mavens gather. Formed in the early 1970s by teenagers d. [Dennes Dale] boon and fellow "corn dog" mike watt, the band came together in fits and starts over nearly a decade. They graduated from cover songs to original material around 1980, when fellow San Pedro High School mate George Hurley joined on drums and they played their first real gig as the MINUTEMEN, opening for a band from nearby Hermosa Beach called Black Flag.

Black Flag's Greg Ginn had founded SST Records, and the MINUTEMEN's debut EP of 1980 (Paranoid Time) was notably the label's second release. Spurning rock clichés on record, coupled with relentless touring, pushed the minutemen to the front ranks of indie rock contenders, with a loyal following that spread across high school and college campuses in the U.S. and Europe.

During this time, they eschewed rock flamboyance altogether, not only in their musical construct but also with their "econo-tour" philosophy of traveling by van, keeping expenses minimal, and incurring no debt to their record label. It was "a road warrior-style approach to touring," wrote one insider, "that involved performing the most gigs possible in the fewest days with the lowest possible overhead." In December 1985, after four albums and seven EP releases, and "four years of watching the tour van odometer flip over to zeros" on countless tours (including the most recent with R.E.M.), the band had decided to take a breather when d. boon was killed in a tragic car crash on December 23rd, effectively ending the MINUTEMEN.

(An indispensable, in-depth documentary film portrait of the MINUTEMEN was issued on a 2-disc DVD package in 2006, We Jam Econo - The Story of the minutemen. The 90-minute film is augmented with music videos; interviews; 62 songs performed live at shows in 1980, 1984 and 1985; and a 16-page booklet with liner notes, rare photography, memorabilia, and more. Interviewees are too numerous to list, among them members of Black Flag, X's John Doe, Ian MacKaye of Minor Threat/Fugazi, Greg Norton and Grant Hart of Hüsker Dü, the Red Hot Chili Peppers' Flea, Jello Biafra of Dead Kennedys, J Mascis of Dinosaur Jr., Sonic Youth's Thurston Moore and Lee Ranaldo.

An inconsolable mike watt retreated from music in 1986, though friends like Sonic Youth urged him to go on, and even brought him to New York to play on their recordings; his first post-MINUTEMEN band was "dos," a bass duo featuring him and Black Flag bassist and soon to be spouse, Kira Roessler. Ohio State University student Ed Crawford, determined to join forces with watt and Hurley, auditioned for watt in San Pedro and soon won him over. Relocating to 'Pedro, Ed 'fROMOHIO' Crawford became the lynchpin for a new group who took their name from a Bob Dylan lyric on "Subterranean Homesick Blues": "...better stay away from those that carry around a fire hose..." Some of their earliest repertoire was based on instrumentals watt had written with Roessler that fIREHOSE put lyrics to.

fIREHOSE recorded their first three albums for SST: Ragin', Full On (1986), If'n (1987), and fROMOHIO (1989). A disenfranchised outsider generation of hardcore flannel-flying punks and skateboarders all embraced fIREHOSE, who stuck to the econo-tour ethic in all regards.

Signed by A&R man Jim Dunbar, who collaborated on their first recordings for the label, Columbia brought fIREHOSE into the '90s. By the time the group disbanded in February 1994, after playing their final gig - where else, but in their 'Pedro hometown - they had logged some 980 shows over the course of seven-and-a-half years together.

The Zelig-like presence of mike watt at the nexus of innumerable developments in music over the next two decades is a story unto itself, starting with his first three solo albums (all Columbia Records), led off with Ball-Hog or Tugboat? (1995). Indicative of watt's stature, the album enlisted no less than 48 different participants including members of Nirvana, Pearl Jam, the Beastie Boys, Soul Asylum, the Lemonheads, and the Screaming Trees. In fact, the tour line-up for watt's first solo shows included Pearl Jam's Eddie Vedder on vocals, the Germs' Pat Smear on guitar, and Nirvana's David Grohl on drums, with Grohl's then-new group, the Foo Fighters, delivering their very first live performances in the support slot, as well as Vedder's Hovercraft.

watt's solo albums continued with Contemplating the Engine Room (1997) featuring future Wilco guitar wizard Nels Cline, and The Secondman's Middle Stand (2004), which reflected upon a near-fatal illness and the long recovery that followed.

Among watt's many collaborations and side projects, both in the studio and on the road are: Unknown Instructors with George Hurley, guitarist Joe Baiza (Saccharine Trust) and a revolving cast of vocalist/poets; the Fog with J Mascis; Banyan, an experimental alt-jazz project with Pyro/Jane's Addiction member Stephen Perkins; hellride with Perkins and Peter Distefano ("whupping up Stooges in a John Coltrane way"); Li'l Pit; Crimony; Bootstrappers; the original Punk Rock Karaoke with Eric Melvin of NOFX and Greg Hetson of Bad Religion; and so on.

watt is most visible this past decade as a member of the Stooges. That traces back to the Wylde Rattz with the Stooges' Ron Asheton, Mudhoney's Mark Arm, Sonic Youth's Thurston Moore and Steve Shelley, covering the Stooges' classic "TV Eye" for the 1998 soundtrack of Todd Haynes' cult film Velvet Goldmine. In 2000, a group with watt, J Mascis, and Ron and Scott Asheton began playing Stooges songs at one-off gigs. This led Iggy Pop to invite watt to join the reformed Stooges (with the Ashetons) at Coachella in 2003, touring with them as well as playing on their 2007 comeback album, The Weirdness. watt continues as a Stooge in the current line-up with Raw Power guitarist James Williamson, who rejoined in 2009, after the death of Ron Asheton.

Of course, watt's tenure with the MINUTEMEN and fIREHOSE will always be a part of his rock DNA. "Besides propagating the MINUTEMEN's experimental edge," Azerrad's liner notes conclude, "fIREHOSE scaled heights the MINUTEMEN never reached, while functioning as a vital part of the indie community, musically, socially or operationally. fIREHOSE - like the MINUTEMEN - jammed econo. And as these recordings prove over and over, they also just plain jammed."