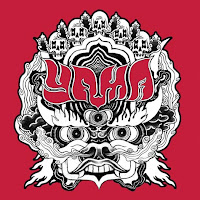 A few weeks ago, I received an email from Mind Flare Media in regards to an EP the label is releasing called Seaquake.  The band?  A Kyuss/Goatsnake-stoner-bred rock band from The Netherlands called Yama, who don't disappoint as far as expectations set by the genre's progenitors.

Riff and speed (or, lack thereof) are all there, tripping on the slow and steady THC rock motif that the band eschews halfway through the EP's title track.   Vocally, the band toys with reverb effects, playing on some studio-induced notion of expanse or isolation.  The music itself, though, is a tad too refined to capitalize on such a device, the idea of infinite space only somewhat successful.  The guitar solo in the song "Synergy" attempts this as well and it's almost drowned underneath the chugging rhythm section, which has more emphasis.

Otherwise, Seaquake is an enjoyable three songs with enough head knock to entertain.

Sample below and check out info on the album and Mind Flare Media's t-shirt promotion.  All details come courtesy of the label.

Yama is a heavy stoner rock band from Tilburg/Utrecht, The Netherlands.  They've been active since 2008 with influences ranging from (60's/70's) psychedelic rock, to doom and stonerrock and delta-blues.  Yama has a classic sound similar to Goatsnake, Baroness, and Graveyard with some weed-laced riffs thrown in to the mix, leaving these guys set to make a mark for themselves in the genre.  They focus on heavy grooves and big riffs to create their version of heavy, fuzzed-out stoner rock.  Yama released a limited demo shortly after they started touring in Europe, and were recently signed by Mind Flare Media.  The demo is now out-of-print will be reissued in April of 2012 with completely new artwork, now an EP titled Seaquake.  Seaquake contains three heavy doom/stoner tracks running almost thirty minutes.  In addition to the EP, I'm running a special promotion for the band where buyers can preorder the EP at half price with a limited shirt in one of two designs.  Each package costs only $25 with shipping included in the US, $30 worldwide.  The promotion runs until March 31st 2012, and after this the shirts will no longer be available for sale.  Fans can listen to all of the tracks at the Bandcamp link featured below, which includes a link to the label's official site for ordering the package.  The artwork featured on Bandcamp is for one of the two designs.