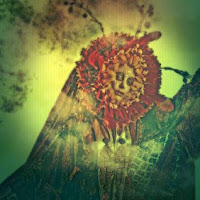 One of last year's more interesting albums was the distortion happy Madness In Miniature by Mr. Gnome, its members Nicole Barille and Sam Meister having crafted a very strong guitar album that based itself on fantastical imagery.  Mr. Gnome makes the guitar/drum duo thing work pretty well, maximizing their sound beyond what some would consider a limited musical vocab.  Actually, the record catches you by surprise, some of the band's decisions and musical shifts as cerebral as they were imaginative.

Following last year's LP, Barille and Meister have released a two-song 7" called Softly Mad, (which is digital-only apparently, so I'm still trying to figure out how physical circumference applies to digital music, but I guess that's just semantics), which differs in that it's less concerned with pop rock melodies, time signatures and alt. riffs.  Softly Mad is slow, ponderous and electronically propulsive.  It's also more vocal, the A-side, "The Way," comprised mostly of Barielle's voice which is multitracked into an array of choral backgrounds in addition to her main vocal.  Guitar sounds provide dissonance and carve haunting slivers through the song's wall of voice.  The B-side, "Still Life," follows roughly the same motif, though Barille is more isolated this time around.  Softly Mad is what it claims to be, though Softly Pensive or Softly Pretty would both have sufficed.

"The Way" — (Single provided with permission by Terrorbird Media.)