This year, I had to overcome a lot of cynicism. 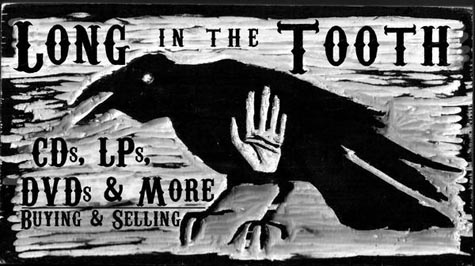 As 2011's Record Store Day proved to be a mad rush of E-Bay opportunism thanks to the simultaneous wonder and woe of the RSD Exclusives, I decided this year that I would go to another store, Long In The Tooth, located at 20th and Sansom in Center City.  The store being opened at 12, it was a good idea to get there early, flashing back of course to the line I had to stand in last year and the ensuing wrestling match that followed once the doors were opened. 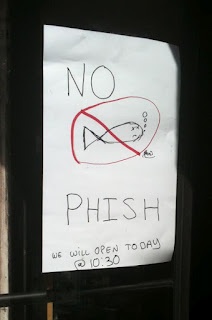 My brother and I arrived at the store at 10:50.  No line.  No shouting or incidental noise.  No pushing and shoving.  All we saw was a paper sign on the door, with an amusing magic marker drawing of a Jesus fish with sad eyes and a big ANTI slash cut across it diagonally.  The sign read, "NO PHISH — We will open today @ 10:30."  "Fuck," I thought, "We're late."

Last year, I and some friends, went to A.K.A. Music in Olde City.  The RSD Exclusives were set out on tables and racks, a veritable yard sale positioned in front of the store as you walked in.  Because of this, you had to push your way through hipster commerce to get into the store, which put me off.  I was expecting this as my brother and I walked into Long In The Tooth, but this wasn't the case.  The owner kept all the exclusives behind the counter, so customers had to ask what was available.  Otherwise, shoppers were scattered about the store, their fingers busy filing through its very well-stocked inventory.  The air was relaxed.  Almost too relaxed.  With ample time to sort and sift through the store's wares and ask about albums as we thought of them, we were free to explore. 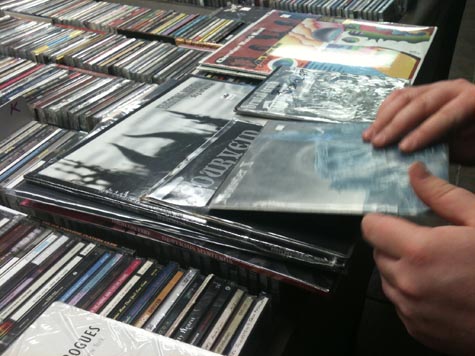 In spite of my pseudo-reservations regarding the Exclusives, there were some releases I wanted to check out.  I had a printed list sticking out of my back pocket, which I didn't even really use, so more than a few times I would peer out past the counter, squinting my eyes in effort to get all the clarity out of them that I could.  A pretty expensive STAX box set of 7" vinyl, Never To Be Forgotten - The Flip Side of Stax 1968-1974, was very much in demand and rightfully so. If not for the $75 price tag I would've picked one up myself, but that would've depleted most of the day's budget.  I did, however, find the Lee Perry Blackboard Jungle Dub box set, three 10" albums colored red, yellow and green.  $37, to me, was very reasonable.  My other "must have" was the Mike Watt & The Missingmen/Chuck Dukowski Sextet split 7," which I picked up for $8.  I'd been asked to keep my eyes peeled for a copy of Bill Evans' Selections from Live at Art D'Lugoff's, but as far as jazz releases, Long In The Tooth only received the The Dave Brubeck Octet's Distinctive Rhythm Instrumentals.  My brother's Exclusives included the Watt/Dukowski 7," the "Diddy Wah Diddy" 7" from Captain Beefheart & His Magic Band and the Pretty In Pink soundtrack, which I thought about picking up as well, but didn't. 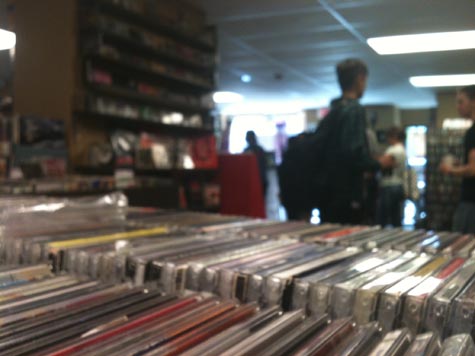 The Eponymous To Anonymous box set from Tomahawk, One Drop by Public Image Ltd. and the double LP edition of Iggy & The Stooges' Raw Power were also considered, but price and availability were factors.

Once I had secured my Exclusives, I turned my attention to the stacks.  I pulled Open Your Heart by The Men, one of my favorite albums of 2012, a live four-song 7” from OFF! titled Live at Generation Records and a used copy of God is the House by Art Tatum.  I had contemplated picking up Ufomammut's Oro: Opus Primum, a remastered double LP of Hüsker Dü's Zen Arcade and Conference of the Birds by Om, but the aforementioned budget limitations spoke much louder than my impulses.

I was very happy, though, to get that Lee Perry set and Watt/Dukowski split.  I was also happy to leave the store feeling as though as I was amongst vinyl junkies and music fans as opposed to online merchants looking to score some easy cash.  I'm pretty sure I'll return to Long In The Tooth for next year's RSD and hopefully many times before then.