Dear Grass Is Green: I missed Jawbox, too. 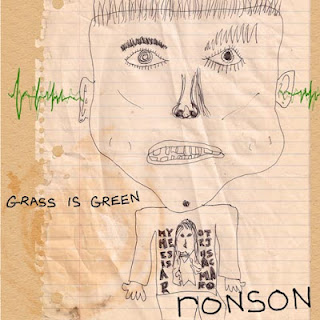 I've been listening to Ronson, the third album from Boston post-punk/post-hardcore band, Grass Is Green, on and off since its release.  Many times I've sat listening to it and attempted to perfectly distill my reasons for liking it, which hasn't been easy.  Speaking objectively, Grass Is Green could serve as the functioning successor to Disc 2 of Dischord Records' 20 Years of Dischord compilation, their own sound the perfect culmination of many of the bands featured on that disc, namely Fugazi, Faraquet, Branch Manager, Smart Went Crazy, Jawbox and Lungfish.  Ronson captures many of the elements that shaped and informed early pre-Alternative 90s America, the sort of off-kilter rock sounds that epitomized the shift from hardcore to indie rock.  The combined efforts of guitarist/vocalist Andy Chervenak, guitarist Devin McKnight, bassist Michael Thomas and drummer Jesse Weiss, despite their allegiance to point and sound in time, are refreshingly guitar-driven and loud.

But, saying that a band simply "emulates an already established sound to supply its output" as opposed to "embraces an established sound to inspire its output" shortchanges their abilities.  Derivations and nostalgia be damned, Grass Is Green is a good band, capable of being somewhat whimsical ("Three Little Chickens"), melodic and pop-driven ("Nice Guy of the Year Award") or a little esoteric ("Devin's Lament").  Ronson provides a musically well-versed collection of songs that can appeal to both appreciators and casual listeners, the funk-laden tone of "Dance Punk Revival School" or the Thurston Moore-based strums of "Panera" contrasting nicely with the more ballad-toned "Somebody's Something" or straightforward and catchy "Riff Sibling."  Other songs like "Life Of Mike" and "Baby Prieto's Big Score" will have an audience with alterna-heads and listeners that latch onto college radio like newborns suckling mama's instant breakfast, but to the absolute exclusion of nobody.  Even at its most experimental, Ronson is just a fun and entertaining album, which is something you can't really explain with an academic's perspective and a lexicon abundant with five dollar adjectives.

Sincerely,
Letters From A Tapehead
alternative exploding in sound post-hardcore