Swans: We Rose From Your Bed With The Sun In Our Head (Revisited)

- April 23, 2012
In January, Young God Records put out a handmade version of We Rose From Your Bed With The Sun In Our Head, which is a live double-LP from Swans.  Despite its varying degrees of expense, up to $600 if I remember correctly, all 1,000 copies sold out within 24 hours.  For those of us, (as I myself had neither the money nor the knowledge that sale had commenced), that missed out, a general release of the album is planned for May 1st.

All info has been provided by Howlin' Wuelf Media.

The band's 2010 release, My Father Will Guide Me Up a Rope to the Sky, was reviewed for No Ripcord and my pick for best album of the year. 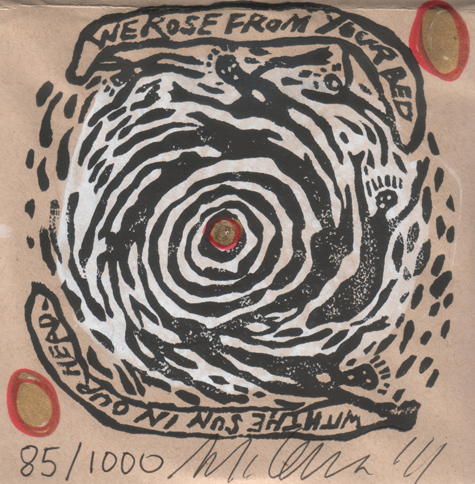 Available in limited quantities in stores and primarily through http://www.younggodrecords.com and live Swans concerts.

“We Rose…” was initially released as a limited edition of 1000, handmade special 2xcd package with various levels of purchase for fans to offset the costs of the new Swans studio album The Seer. The edition of 1000 sold out in under 24 hours.

These recordings capture the rejuvenated and invigorated Swans as the group staked out new sonic and rhythmic terrain in 2010/11. The seeds of much of the upcoming album The Seer are contained herein as the group developed new material while on tour. The tour(s) saw Swans enjoy the largest and most diverse audiences of their career. Contrary to the expectations of some, the experience was, though sometimes extreme, always joyous.

Thanks to all of you who attended the Swans shows during our recent tours. The experience, for us, was life-giving and nourishing. The audiences were not only the largest with which we’ve ever been blessed, but the most genuinely connected and in tune with the sonic/psychic experience in which we all participate. Thank you!...

Represented in these discs are the best recordings we could provide of the (ever-evolving) shows. Those of you who attended the early shows realize that the first iterations of the music morphed and grew (seemingly with a will more expansive than our own) into something quite different by the
end. This, in itself, was immensely gratifying. We also developed many new songs  – or sonic events is perhaps a better way to describe some of them - along the way. In compiling these recordings and mixing them with my trusted friend and engineer Kevin McMahon (at Marcata Studio, Gardiner NY), we did our best to represent that transition... if you choose to acquire this 2 disc set, in my view it would behoove you to listen to the music at a generous volume level. This has absolutely nothing to do with an aggressive intent, as some mistakenly assume. Exactly the opposite, in fact. As with the live experience, it’s all about immersion. We – Swans - experience that sense of being subsumed in something greater than ourselves when we perform, too. Maybe that’s even our selfish reason for making the music in the first place. At the best of moments, it doesn’t even feel as if we are playing the music ourselves. More that we’re animated – vivified – by the ongoing sonic wave.  I can’t speak for my friends and cohorts, but it’s what I live for. In any event, it’s my hope these discs provide you with a positive experience of some sort....