I shook Tatsuya Yoshida’s hand just before he got the bottle of water he’d requested from the bartender in broken English. Up to this point, I’d been sitting at the bar at Kung Fu Necktie, enjoying a glass of Yards and the company of friends. Yoshida’s warm-up for soundcheck was enough to keep my attention off of the Flyers game (they lost), his every automatic motion resultant in arrhythmic battery, precise and complex. After every quick lapse into percussive onslaught he would inquire, “Sound okay?” The show hadn’t even started and it was already money well spent.

Yoshida performed Tuesday night as Ruins (Alone), another iteration of his Ruins project which is normally a two-manned operation either based in guitar or saxophone, (or some other instrumental permutation I may have missed). For this version, Yoshida ran solo, the music parts of his act supplied by a small laptop and manipulated sound effects that he would manually conjure with one hand while his other would work the hi-hat and snare. Later in his career, Frank Zappa had a vision for this type of self-reliant musical dynamic as he became better associated with then-emergent technology. Seeing Yoshida, a complete band successfully merging the virtual and physical aspects of a performance, it’s sort of amazing that a musician of Yoshida’s caliber could recreate the one-man band without benefit of studio or overdubs. 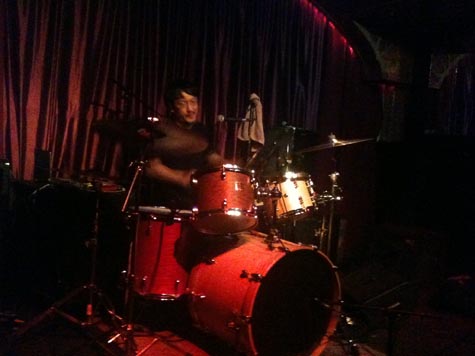 Philadelphia-based Inzinzac was the first band to perform, their combination of James Chance-like no wave/art guitar and big band heft a very bold start for the evening ahead. Very well-conceived rhythms and harmonies, great arrangements. No merch available, which really bummed me out. They would have had whatever amount of cash I had crumpled into my wallet guaranteed. The same could also be said for the following band, Gun Muffs, an absurdly immense and maximized jazz metal duo that boasted the most elongated and deep saxophone wail I’ve ever heard. Granted, the effect was something the saxophonist leaned on with every ounce of his being, but that seemed immaterial next to the presentation, his low end and simultaneous sax honk cleverly applied to the percussive chaos beneath.

The band that DID have merch was the next crew, a New York prog-core trio called, Child Abuse. A synthesizer, bass, drum combo, Child Abuse reveled in off-time repetition, appropriating the jazz-irregularity of The Dillinger Escape Plan and applying it with note-less, riff-less vigor. This is not something I usually state considering how prone I am to loving the most irritating or noise-based albums or bands I can find, but Child Abuse was not an easy set to get through. The music itself was injected with so much self-importance and so little actual musical ability and it was difficult to get past how self-indulgent their performance seemed. Next to the two openers, Child Abuse may have had the longest set, or it just felt that way.

Yoshida set up. Closing in on midnight, the first few snare taps sounded my leave of the bar. 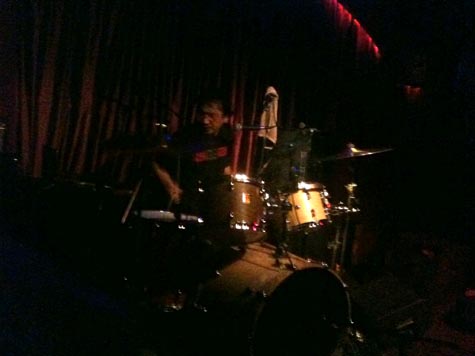 Being challenged musically, as in “I can’t play shit,” I don’t necessarily have the background or skill to truly understand how difficult it is to achieve certain sounds or pull off musical patterns. But, I know movement and I know that the speed and proficiency with which Yoshida attacked his drum set are what any aspiring or practicing drummer would work toward. I thought I recognized a couple sections of music from his Koenjihyakkei work and a Sax Ruins piece, but I was mostly mesmerized by his attack and his array of changes and speeds, combinations and sounds. Next to the machine he was playing against, it was as if he were the more superior, his instincts and unfailing understanding of the music almost either on par or almost surpassing the assured and dependable responses from his software. Granted the human condition makes this impossible, our tendency to fail or tire always keeping us shy of perfection, but I swear it was twenty or so minutes before Yoshida showed any evidence of perspiration.

By the end, though, you could tell he was exhausted. It was 12:06AM and time to go home. I pondered the theft of a poster for the gig outside the Necktie, but thought better and split.