- May 25, 2012
Next week, At A Loss Recordings is releasing Avenger, the 2011 release by heavy rock trio, Totimoshi, on vinyl in a very limited run of 500 copies.  Check out the video for the single, "Avenger," and then read my review of the album, which you can find at Stereokiller.  I even got quoted in the press release.  Go me.

All info and links are courtesy of Earsplit PR. 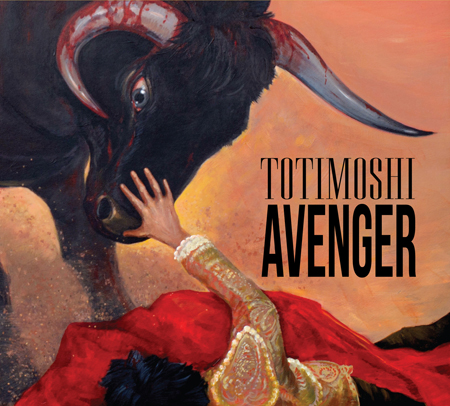 TOTIMOSHI: At A Loss To Release Vinyl Version Of Avenger; Pre-Orders Available NOW!

On May 29, At A Loss Recordings will unleash the vinyl edition of Avenger, the critically-acclaimed studio offering from California desert death rock trio, TOTIMOSHI. Championed by Rock Sound for its “smart and uniquely wonky brand of hard rock that’s sometimes bluesy, sometimes sexy, sometimes spaced out but never anything less than completely compelling,” and commended by The Obelisk for its absorbing variations, noting: “It’s dissonant but melodic, dirty and clean, noisy but engaging, structured but open,” Avenger is another eclectic milestone in the band’s already winding catalog of sonic ingenuity.

“Avenger is fresh and crisp, with much to digest…. a thoroughly satisfying album.” — About.com

“Though it aims for the throat, Avenger consistently seeps into the soul, proving that Totimoshi remain one of the most original forces in modern metal.” — Exclaim

“Comparable to classic rock, but fused with enough modernity to grant relevance over nostalgia, TOTIMOSHI is a steady and robust rock unit, at times flirting with enough progressive adventure to negate expectations of typical rock repetition.” — Stereokiller

“The freshness of a band setting their own rules and virtually creating their own unique pigeon hole is rare, admirable and in the case of Californians TOTIMOSHI deeply satisfying.” — This Is Not A Scene “…their best piece of work to date.” — Doommantia

“Sludge metal meets alternative metal meets ‘70s hard rock… an album which – with the presence of elements from a number of different rock genres – probably will have a broad appeal among fans of alternative rock/metal, sludge metal, psychedelic heavy rock, progressive hard rock and perhaps even dark progressive metal along the lines of Psychotic Waltz.” — Sea Of Tranquility