Substance experimentation and abuse have been contributing to record collections since before Charlie Parker’s appetite for heroin inspired his jazz peers to riddle their own arms full of “holes of creative inspiration,” emulating the man’s routine in an effort to become half the player he was. Drugs alter your perceptions, sometimes for the betterment of one’s own abilities to create, and have been known to influence the best known works of art, literature and music. Let’s not consider the junkie’s ultimate price for now as this is NOT an article directed toward protecting children from snake-headed pill pushers or aiding the promotion of a drug-free America. After all, I’m writing about Dopesmoker, one of the loudest, proudest odes to herb since Black Sabbath’s “Sweet Leaf,” a gargantuan, hour-long tribute brought to be by stoner metal pioneers, Sleep. The last thing I want to endorse is avoidance of substances, especially when ingestion or inhalation can generate something this powerful.

If you know the album, you likely know its legend: Sleep’s single hour/single song LP was too bold and ambitious a move for their then-record label, London Records, to consider releasing. As a compromise, Dopesmoker was split up into sections and retitled Jerusalem, but that was still not enough to persuade the label to release the album. Out of frustration and disillusionment with their situation, Sleep called it quits. Jerusalem was later bootlegged and released by Rise Above Records/The Music Cartel in the late 90s and Dopesmoker was finally released as a definitive album by Tee Pee Records in 2003. Southern Lord has been granted the privilege of reinvigorating the release, updating its artwork and repackaging it for a 2010 generation’s worth of appreciators, (or so we hope), and for existing fans of the album that wish to hear the severity of the music on a turntable. As far as I’m concerned, stereos in our digitally-addled world starve for albums like this. 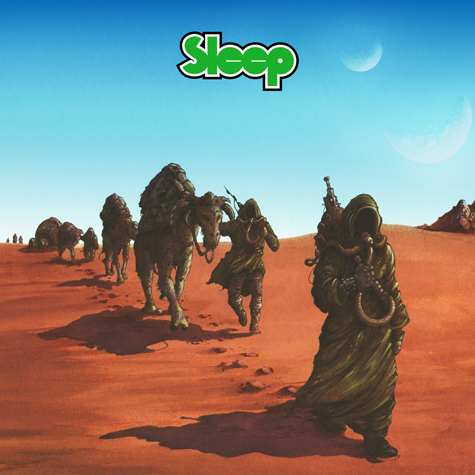 The Dopesmoker artwork was updated by artist Arik Roper, (check out some details of the CD digipack at the blog for Aaron Edge Design here), and was developed into both CD and double-LP packages. Included in the new edition is a live version of “Holy Mountain” performed by Sleep in 1994. The vinyl version also includes the live track, “Sonic Titan,” which was included in the Tee Pee version.

Having seen sections of Dopesmoker performed live a couple years ago, its reputation as a masterpiece of its genre lies solely upon the riffs. Granted the album’s legend is also noteworthy and essential to its being, but the band took advantage of the supposed creative freedom that had been promised them by their record label and came up with something truly primal. For all its hour plus ferocity, Sleep’s concept never really loses steam nor does it bore with its length. In the same way John Coltrane’s Ascension seemed hell bent on cultivating pure unbridled, improvisational strength over a considerable length of time, Dopesmoker, albeit packaged with a sense of adolescent, bong tinged juvenilia, is a strangely ponderous, super repetitive study on composed riff arrangement that doesn’t really stray too far from the traditional song structure. It would be fair to consider the song derivative of hippie-rock jam culture, harkening back to the days of live bands riding guitar-fueled tangents to endlessness.

But, even in spite of Sleep’s jamming dynamic, there’s no free floating, improv’d attack. You could almost consider this built out in movements, the track’s opening set of riffs acting as anchor while the band carries through verses, breakdowns and a couple guitar solos. The fact that the song is so structured might encourage skeptics to discredit it as merely a pretentious stab at metallic grandeur, its discipline seeming to betray the laid back, glazed over state of being one gets from one bong load too many. But, its make-up seems more concerned with volume than chilling out, meditative but feral.

Remastered and ready to be received, Sleep’s Dopesmoker remains unsurpassed.