What I Heard This Morning: JBM

- May 24, 2012
This video of musician Jesse Marchant, otherwise known as JBM, was filmed at the Philadelphia venue Johnny Brenda's by Out Of Town Films.  The song is called "Moonwatcher."  His latest album, Stray Ashes, released 5.22.

All info, links and video comes courtesy of Terrorbird Media. 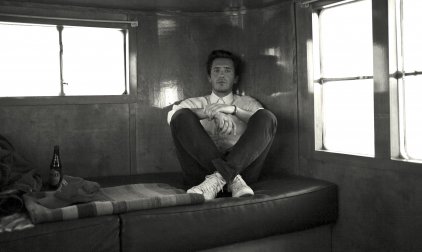 JBM’s sophomore album Stray Ashes is out now on Western Vinyl. The album is streaming its entirety at AOL Spinner. Stray Ashes is the follow-up to JBM's 2010’s debut, Not Even In July, which garnered an imposing number of accolades from outlets such as American Songwriter, Filter, Paste, Spinner and many others. JBM is currently on tour; supporting Damien Jurado in May and just announced a string of headlining east coast dates, which includes a June residency at NYC’s Rockwood Music Hall. Bowery Presents recorded JBM performing “Ferry” off of Stray Ashes at Serett Metal Works in Brooklyn and Out Of Town Films caught up with the Jesse for a special recording of "Moonwatcher" in Philadelphia. Interview Magazine recently sat down with Jesse before a sold out show with Damien Jurado at the Mercury Lounge and said, “If Bon Iver scored Into the Wild, it would sound a little bit like JBM… JBM's sophomore album Stray Ashes is like a musical green screen on which both lush landscapes and overcast cityscapes can be superimposed.“ You can read the full feature here.

Despite feeling disillusioned, drained, and disconnected after an intense year of touring, Brooklyn-based recording artist Jesse Marchant, a.k.a. JBM, felt an insatiable need quietly gestating. After a much-needed break, he relocated to a remote cabin in the Catskills and started the long process of writing and recording Stray Ashes. Like a twilight journey through canyons, with noctilucent clouds on the horizon, these songs flow with refined grace and raw force.

Rather than starting with an acoustic guitar and vocals, Marchant experimented with drums and loops of electric guitar melodies. As the winter progressed, he continued this process until the song structures emerged. To record he relocated to a large log house next to a frozen lake inhabited by hundreds of geese in upstate New York. Despite the din of geese fighting outside, and being attacked by one particular goose on more than one occasion, he managed to record everything but the vocals. He then moved to the city temporarily where he wandered the streets listening to the instrumentals and writing lyrics.

Next, John Congleton joined the project for additional recording and mixing. Congleton's contributions help to define a sonic space throughout Stray Ashes that perfectly cradles Jesse's earnest vocals, as do the additional performances of McKenzie Smith (of Midlake, Drums), and Macey Taylor (of A.A. Bondy, Bass) on several tracks, which were recorded by Congleton in his Texas studio. The gauzy sonic blanket Marchant and Congleton have created provides a foundation for the mysterious collection of songs on Stray Ashes. We don't have to fully understand them to be moved by these shining beacons guiding us through a mellifluous fog. Propelled by Marchant's voice, songs like "Winter Ghosts" and "Keeping Up" seem to effortlessly fill the room with an addictive somber haze, while Marchant seems to implore us to return to something true and meaningful on other standouts like "Ferry" and "Only Now." “JBM has the lush and haunting vocals that are reminiscent of his musical peers - Jim James or Justin Vernon" - Filter Magazine

"...each listen reveals a new layer to be heard and understood." – American Songerwriter

"Marchant, a guitarist since age 7, crafts songs that are lyrically bittersweet but sonically optimistic, with piano and string accompaniments swelling alongside the ubiquitous acoustic six–string" – Paste Magazine