Brave Mysteries: A Hot Day With Two Hours to Kill and an Enabling Tape Deck — Part 2 (Urna, Eolomea and Baldruin)

1). Traditional music listening is not as easy as it used to be.

2). I need a portable cassette player.

Another package from Brave Mysteries, the label that had so generously donated some cassettes for review around winter, arrived at my doorstep months ago and due to poor time management, deadlines and life outside of music blogging and criticism, I'm getting to them very late. 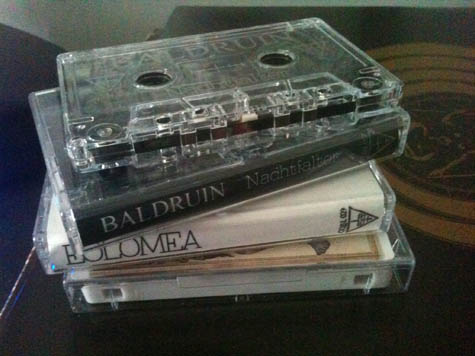 To the label, my apologies.

I will say, though, that this batch was not easy to get through. Inasmuch as I love a good challenge, the ambient chill from Urna, the synthesized void of Eolomea and the compositionally charged anti-melody of Baldruin were difficult to distill, layers and builds to comprehend and appreciate.

If after you read these small reviews you feel the need to own these cassettes, you can find and purchase them at the Brave Mysteries site.

The one-man ambient project known as, Urna, considers "lamentations" and "blood" to be instrumental enough in his album's creation to be included in the list of instruments that built these expansive and at times ritualistic soundscapes. I can't argue this logic.

The album, Larvae, consists of both the whispering, doom-mongering netherworld of noise and isolation as well as the manipulation of semi-harmonic drones and tonality. The result is very large and voluminous, a temple of incidental noise generated by its environs as well as the ringing and clanking of a ritual or service. “Kangling,” “Lha-Mo” and “Murmur” were heavy with these elements, the sounds associated with the type of stuff men and women would generate to appease an omnipresent and fearful product of their superstition, namely a God or some other omniscient figurehead. Maybe I missed the point, but like ritual, like religion, it can all be reinterpreted.

Side note: The bell music of “Rakshasa” goes great with the ice cream truck as it comes driving down the neighborhood street.

If you’re familiar with Locrian, band member André Foisey’s involvement with Eolomea isn’t shocking. I’m less familiar with Envenomist, the project of Foisey’s collaborator, David Reed, but their work together must convey some inkling of what Reed seeks creatively.

Eolomea is built out of synthesizers and the use of guitars, actual structures entering the story at times, though, not without the presence of overwhelming tonality. There are notes involved, “Scotfall and Fallout” guitar solos running in shaky unison and the acoustic beauty of the guitar work in “Ordovician,” which is buried under Foisey’s screams and the steady hum of electric guitar. You have to allow your ears to cut paths within the mire to navigate when something structural occurs, Reed’s keys like plate clouds covering a bird’s eye view of arterial driveways and express lanes. It’s a meticulous blend with much to find beneath the surface, especially with the 20+ minute, “Seven Before the Throne.”

Johannes Schebler’s Baldruin is a shape-shifting mass of looped complexities and instrumental arrangements and Nachfalter, which had apparently taken two years to record, offers an interesting selection. “Wildwuchs” had my attention from the first listen, waves of sound cycling in reverse underneath stringed instrumentation. The same can be said for “Spiegelung,” a steady clanking and strum of vibrating strings glazed with heightened near-symphonic tones. Schebler’s collages are eerie (“Schürfwunde”) or organic (“Weit Drauben”) and sometimes quick to the point (“Irrweg”), episodic in some sense and carried as far as needed to get the narrative through.