Shopping For Records: High On Fire's The Art of Self-Defense 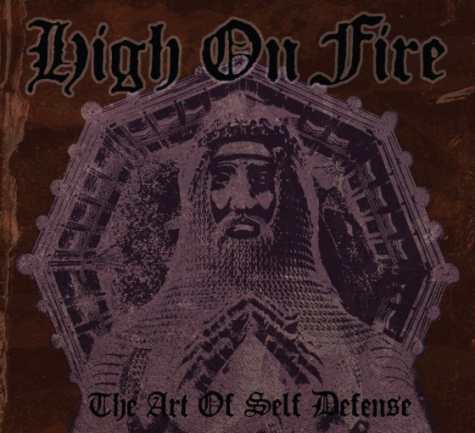 At some point, I'll be reviewing High On Fire's new 2012 release, De Vermis Mysteriis, or I could simply sum it up here:  It's fucking awesome!  It's one of my favorite albums of 2012 thus far!  Do yourselves a favor, find a copy, locate a stereo and keep the volume high.

HIGH ON FIRE: Southern Lord Recordings To Reissue The Art Of Self Defense

Adding to their ever-growing catalog of sonic enormity, Southern Lord Recordings today is extremely pleased to announce the reissue of The Art Of Self Defense, the classic first recording from Oakland power trio HIGH ON FIRE. Set for release on July 31, the landmark long player has been completely remastered and enhanced by Brad Boatright (Sleep, Noothgrush, OFF! etc.) and includes the addition of the band’s first ever demo, two bonus 7” tracks as well as a 48-page booklet!

The Art Of Self Defense was initially released in 2000 by Man’s Ruin Records. Featuring the collective energies of guitarist/vocalist Matt Pike, drummer Des Kensel, and bassist George Rice with producer Billy Anderson, the record billows at the seams with Pike’s instantly recognizable guitar tone, first unleashed during his days with stoner metal behemoths Sleep. An audio hail storm of piledriving riffs, booming rhythms and Pike’s gruff vocal tirades, The Art Of Self Defense remains a staple in HIGH ON FIRE’s renowned catalog of audio greatness.


“Listening to HIGH ON FIRE is a repetitive, near-relentless, harmful experience, an experience enhanced by the band’s thoroughly warped sound. Most of what you will hear on a HIGH ON FIRE release sounds like a hazy, resin-coated gurgle. The guitars are distorted to the point of melting, completely phased out and always a threat to your speakers. Adding to the foggy mayhem are the deafening drums and over-driven bass, both of which are robbed of much of their treble. The drums sound distant and sun burned, the bass sounds like the whore of Babylon’s vibrator. This is the true sound of throbbing gristle.” – Stylus Magazine 9/1/2003