- June 13, 2012
Dinosaur Jr. will be releasing a new album in September called, I Bet On Sky.  J Mascis is one busy, busy man.  Thinking about all he did last year touring with Dino and the various projects he pursued, which included his highly enjoyable solo album Several Shades Of Why, the subsequent tour to support the release and then his recent Heavy Blanket project, it's staggering how productive he's been.  Still delivering on quality, though, which is really what matters.

No singles available yet.  All info, links and dates are courtesy of Jagjaguwar.

"There is nothing quite like a Dinosaur Jr. album. The best ones are always recognizable from the first notes. And even though J tries to trip us up by smearing “Don’t Pretend You Didn’t Know” with keyboards, it’s clear from the moment he starts his vocals that this is the one and only Dinosaur Jr., long reigning kings of Amherst, Massachusetts (and anywhere else they choose to hang their toques). I Bet on Sky is the third Dinosaur Jr. album since the original trio – J Mascis, Lou Barlow and Murph – reformed in 2005. And, crazily, it marks the band’s 10th studio album since their debut on Homestead Records in 1985. Back in the ‘80s, if anyone has suggested that these guys would be performing and recording at such a high level 27 years later, they would have been laughed out of the tree fort. The trio’s early shows were so full of sonic chaos, such a weird blend of aggression and catatonia that we all assumed they would flame out fast. But the joke was on us. 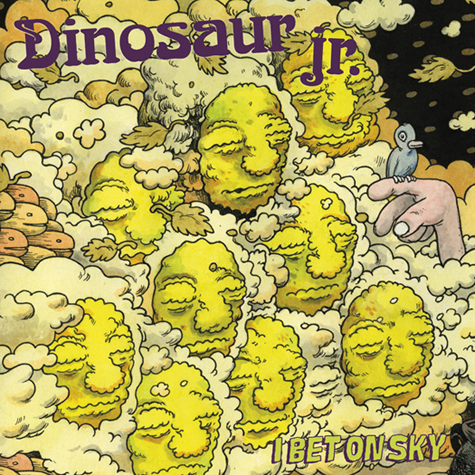 After submerging myself in I Bet on Sky, it’s clear that the album is a true and worthy addition to the Dinosaur Jr. discography. It hews close enough to rock formalism to please the squares. Yet it is brilliantly imprinted with the trio’s magical equation, which is a gift to the rest of us. For a combo that began as anomalous fusion of hardcore punk and pop influences, Dinosaur Jr. have proven themselves to be unlikely masters of the long game. Their new album is a triumph of both form and function. And it augurs well for their future trajectory. If I were prone to wagering, I’d say their best days are yet ahead of them. And yeah. I would bet the sky on it."

I Bet On Sky, their first since the 2009 album Farm, will be released in North America by Jagjaguwar on September 18th, 2012. Summer festival appearances and fall North American tour dates are listed below!