What I Heard This Morning/Week/Last Week: Arc In Round, Ape School, Rumplestiltskin Grinder

- June 29, 2012
Some Philadelphia bred groups for you.  The hometown bursts with talent and gets little to no press.

First, Arc In Round.

Juan Edgardo Rodriguez, the managing editor of No Ripcord, sent me a song and the band's self-titled album a few weeks ago.  While I haven't been able to completely absorb the album yet, (been listening to two or three other albums for upcoming reviews), the band's single, "Hallowed", I really enjoyed.  There's a shoegazing, pop-infused bounce to the song I find very engaging.

I will, at some point, listen to the entire album, which was released June 26th. 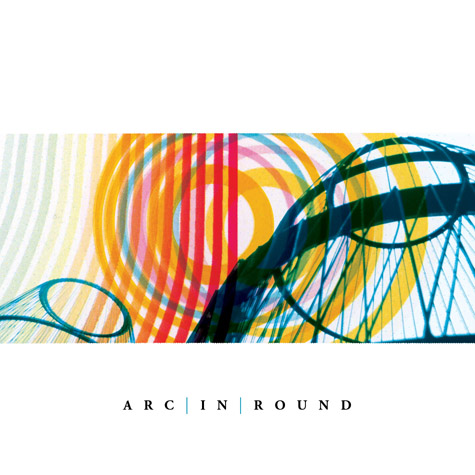 Next is Ape School, who will be releasing a new album later this August called, Junior Violence.  The band's single, "Marijuana's on the Phone," has been released as a 7" as of June 26th.  You can stream the track via Soundcloud.  (Sorry, no embedding.) 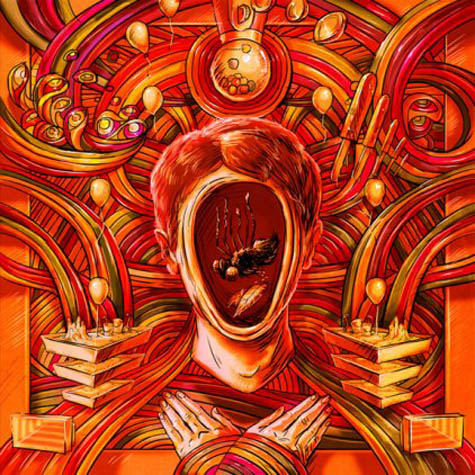 LISTEN/DOWNLOAD: Marijuana's On The Phone
via Soundcloud
Junior Violence begins with a death rattle of the most optimistic sort. Half-synthesized and half-howled, the first song on Ape School's new album sums up birth, death, and the guilt you face as you drop the needle on side A:

Did you know you fucked yourself?

Everything is on the other side of that question. Answer it and you'll wonder why you're just now fessing up. Tell your truth and the Oberheim OB-8 will cascade like a waterfall. The bass line will try to feel you up. It's all foreplay for the anthemic "Marijuana's on the Phone" and the nine tracks that follow, adding up to the second album from Ape School, the flaming sigil for a man named Michael Johnson. Junior Violence is part confession, part blitz, part hangover, and part ascension.

Over the past three years, Johnson built and demolished with equal fervor. Junior Violence was constructed version-by-version, through the controlled burns and tropical storms of experimentation, collaboration, a well-timed Eventide sponsorship, day jobs (teaching), and night jobs (playing and recording with friends War on Drugs and Kurt Vile). Part of Philadelphia's musical fabric for a decade, Johnson started life in Florida. Born into that solid-state bed of Def Leppard and Van Halen and the subsequent pan-generational cures of Jane's Addiction and Dinosaur Jr., Johnson went from building guitars out of legos and smoking joints at church talent shows into the Gainesville d.i.y. scene and a pile of bands -- including Holopaw. Touring, joining the Sub Pop label, album-crafting with Brian Deck, and Johnson's first taste of digital recording meshed with his march toward professorship at an art school in Philadelphia. That geographic shift coincided with tourmate Sam Beam (Iron and Wine) introducing Johnson to Kurt Vile, an IDM love affair giving way to a lifelong relationship with Daedelus (who took Ape School's record to Ninja Tune after it was mixed at Rastafari studio in Brooklyn), and Johnson playing in the last audible breaths of Lilys.

The Ape School equation, worked out in real time on the I-95 corridor, is audible in Junior Violence's forty minutes. Experience, context, the skill to build a raging fire, and the confidence to toss ideas straight into the blaze drove Michael Johnson to embrace first takes, to fuck up, to play match maker between Pink Floyd and Prince, between Soft Machine and Queen, and to build a band out of geniuses. The album and live lineup features Eric Slick on drums, who joined Ape School while he was playing with Adrian Belew (King Crimson) and who went on to join Dr. Dog. Liz Boyd, Scott Churchman, Adam Ravitz, Zach Poyatt, Beachwolf, and a rotating roster of former students perform as Ape School and round out its undeniable wall of sound. "If it sounds like it is directed to somebody else, it's probably directed at me." Johnson can tell a story for every song. "Marijuana's on the Phone", the album's lead single (out on a 7" this June), began as drunken strum into a tape recorder that was rounded out the morning after with Slick, an ARP 2600, and that swinging baritone sax. The pulsing "Carry On" was based entirely on a Ras Michael reggae beat. Electrified with Boyd's vocals, an addictive chorus, and that clear-ringing guitar line, you might catch a whiff of meaning: acute perception can be a real pain in the ass; sometimes you just want to be stupid. "Ready for Duty", a nod to Captain Beefheart, calls out the oil-filled Gulf of Mexico lapping the shores of Johnson's hometown -- a suicide note and a love letter, all at once.

Michael Johnson declared to all, "I've got sourpuss down to a science," and, indeed, Junior Violence is an acidic pop exploder. It sends bullets flying and knives thrusting, but it does so in the golden light of Summer. This album professes love in its exploration of all the parts of life that hold you back from that very pleasure. It declares passion in its obsessive care and quality, and in its respect for and exaltation of moments of trouble and chance. It's an ode to invention, to the sonic recipe that calls for everything from synth to sax. And when you think about life and all us living it, there might be no better name for it than Ape School.

-Sara Padgett Heathcott, Hometapes
"a terrific pot of psychedelic pop tea, brimming with catchy melodies, bright production, and playful (just weird enough) creativity. If you wished there was a middle ground between the two MGMT albums, this might fit that bill." - Brooklyn Vegan

"the sonic equivalent of peyote-eating in the desert — arid, expansive and full of shape and color." - RollingStone.com 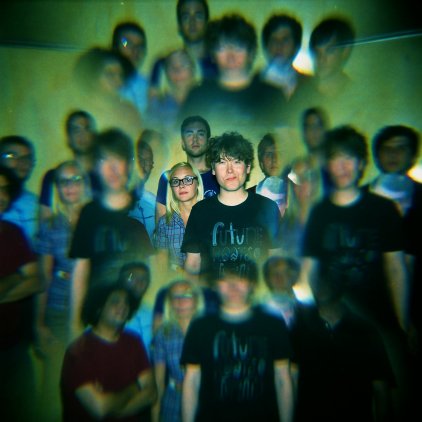 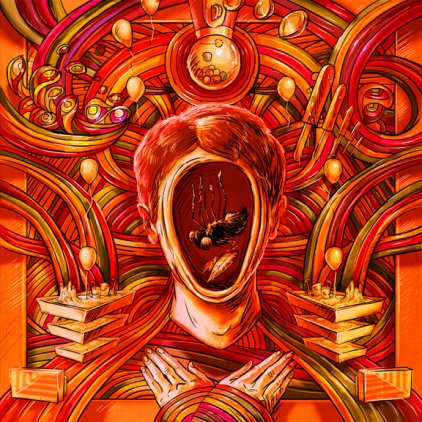 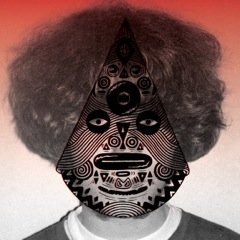 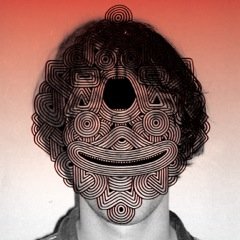 Feast your metal ears via Stereokiller. 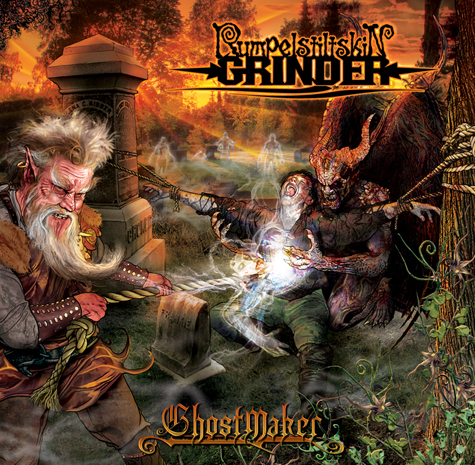 RUMPELSTILTSKIN GRINDER's New Album Out Today And Streaming Via Metalsucks

Ghostmaker, the third full-length from Philly's adrenalized death/thrash quartet RUMPELSTILTSKIN GRINDER, is out today in North America via Candlelight Records. With more than forty-five minutes of nonstop soul-crushing thunder, Ghostmaker shows the outfit at their most antagonistic yet, while also showcasing the most talented musical prowess from RSG to date.

The mob at MetalSucks, who are obviously big fans of the hard-partying RUMPELSTILTSKIN GRINDER ethos, are streaming all twelve neck-wrecking tracks from Ghostmaker for a limited time. Get blasted RIGHT HERE.

Now in their tenth year as a unit, RUMPELSTILTSKIN GRINDER currently contains members of Absu, Woe, Azure Emote, Ashencult, Fucked Forever, Total Fucking Destruction, Smoker & the Rollers and more. Ghostmaker was produced by the members of the band and bears cover art by gore artist Mike Hrubovcak (Sinister, Grave, Hate Eternal, Cattle Decapitation, etc.) as with several of the band's previous releases."There are too many more moments of memorable riffage, solos, variations, and crypt-shattering lyrics to try and name them all. Literally every song is chock-full of them. 4.75/5" - Stereokiller

"Few bands party harder based solely on the power of their SICK RIFFS than Philadelphia’s Rumpelstiltskin Grinder." - MetalSucks
"...a prime example of a band who is at the top of their game, and truly shows off the band’s songwriting and musical abilities. Catchy riffs, excellent guitar solos, fantastically executed vocals and an entertaining drum performance, what is missing from this equation? Nothing. 8.5/10" - Axis Of Metal