Menomena: "Heavy Is As Heavy Does"

- July 20, 2012
Portland art rockers Menomena will be releasing their new album, Moms, on September 14th.  A new single, "Heavy Is As Heavy Does," has surfaced.

Below is a teaser trailer for the album along with information provided by Prescription PR.

Menomena's 2010 release, mines, was reviewed at No Ripcord. 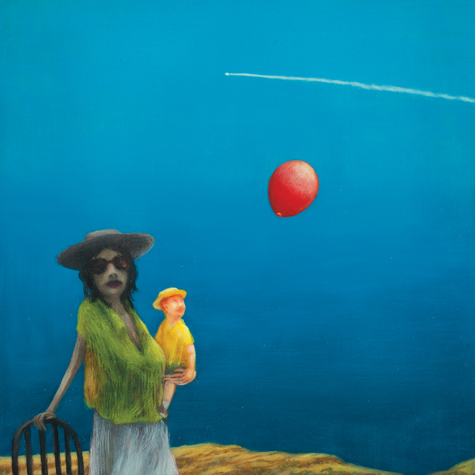 MENOMENA TO RELEASE MOMS IN THE UK ON OCTOBER 8th

Barsuk Records is excited to announce that Menomena will release their new album, Moms, on September 18, 2012 in the US and on October 8 in the UK. Moms is the Portland-based band's fifth, and their first as a duo. A teaser trailer for the album (featuring a guest appearance by an indie-rock pug) is available below. In support of Moms, Menomena will embark on a North American headlining tour in Autumn, followed by dates in Europe and an appearance at the revered All Tomorrow's Parties festival in the UK. Those tour dates are listed below.

During the last decade, Menomena has become its own reference point. From hooks wrapped around plummeting baritone saxophone lines and nearly inhuman rhythms to serpentine lyrical frameworks and high-concept album art, Menomena has established a singular and unmistakable aesthetic. They embed magic and mystery within pop songs that have never sat still or taken the path of least pressure.

After 2010's irrepressible and intricate Mines, Menomena co-founder Brent Knopf took his leave to focus on his solo project causing Justin Harris and Danny Seim - close friends since high school and now well into their second decade of making music together - to recast Menomena as a duo. They didn't slow down; they actually sped up, writing, recording and releasing Moms with more focus and speed than ever before.

Harris and Seim didn't invite loads of friends or collaborators to replace Knopf; they made these songs as a duo, intent on proving - directly to themselves, and by extension, to everyone else - that Menomena essentially remains the same brazen band responsible for Friend and Foe, Under an Hour and all the gut-punch, pop-ambition moments therein. They added new instruments, like flute, cello, more of Seim's synthesizers and the tap-dancing that actually laces through the teasing-then-charging opus, "Don't Mess with Latexas." For the first time, Harris and Seim, who each contribute five songs here, talked about what they were writing, too. Seim explored the death of his mother when he was but a teenager, while Harris investigated the way his own family dynamic - a single mom, with a departed dad - left indelible impressions on everything he's done since. The album's pieces connect, then, addressing how people must rise to face or flee circumstances beyond their control. It's perhaps the most appropriately imaginable prompt for a band whose last two years have depended upon their ability to explore, adapt and improve.

The result, Moms, is tragic and intimate, comic and endearing, personal and motivated. In 10 songs and just less than 50 minutes, Harris and Seim cast pop cascades into noise kaleidoscopes ("Baton"), chop and twist a melody until it becomes a big dance beat ("Capsule"), and build inescapable arrays of tension and texture that finally release ("Tantalus"). Opener "Plumage" couples its surge of energy with a cleverly playful study of sexuality, while "Pique" turns the same sort of impossible tessellated-rhythm tricks that have become a Menomena trademark.

At the close of it all, the slow strangle of "One Horse" arrives as the most poignant moment yet in Menomena's catalogue, piano plinking and strings sliding beneath Seim's existential evasion. It's the perfect summary statement for Moms, an album that explores both a new vulnerability and resiliency within Menomena, a duo that's taken change not as an excuse to opt out but instead as a catalyst for growth.