- August 09, 2012
Ascent is the new Six Organs of Admittance album that will be out August 21st via Drag City and Mr. Six Organ himself, Ben Chasny, plugs in and hits up the astral turf for the below tracks, "One Thousand Birds" and "Waswasa."

Asleep on the Floodplain, the 2011 release from Six Organs of Admittance, was reviewed at No Ripcord. 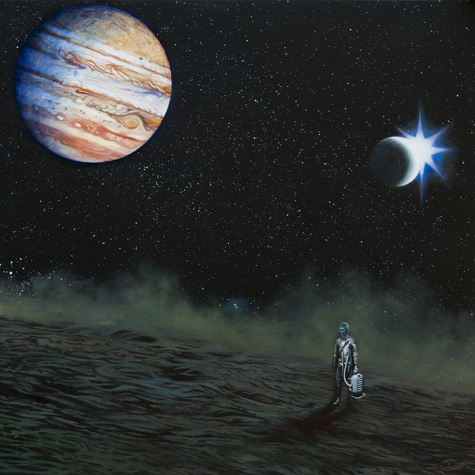 In anticipation of the imminent release of Ascent, the brand new Six Organs Of Admittance album, Drag City unleash another audible treat in the form of a giveaway track taken from the record, 'One Thousand Birds'. Download, listen to and share using this link - http://soundcloud.com/drag-city/six-organs-of-admittance-one.

To be honest, someone tipped us to this and we're totally perplexed... Chasny's been reticent to comment while shedding for the upcoming Six Organs of Admittance tour, but we can't stop watching and feel the need to share publicly, even though it appears there's a conspiracy to prevent people from purchasing or even listening to Ascent. Call us the "sheeple," but while that sure as hell does look like Matt Sweeney testifying to some crazy experience where lizard-like men herding Chasny off into the shadows during a Current 93 soundcheck in Moscow, we just can't believe Six Organs is involved in any Illuminati-type business. Anyway, besides giving us a scary WTF?-feeling, and despite Six Organs' Jack Parsons 7" coupled with this recent Mars landing of NASA's "curiosity" machine, we've got to share this and confirm as best we can, there's no reason to fear Ascent...we hope!?!?!?!!

Six Organs of Admittance as an electric entity is not without precedent. Ben Chasny regularly performs with a full, electric band, often cascades an electric guitar solo in the middle of an acoustic jam, and has recorded entire sides of electric drone. This element goes all the way back to 2002, when a short-lived rock version of Six Organs (with the members of Comets on Fire) toured the West Coast and etched a few demos to tape before moving on. Ten years later, with the idea to record new songs as a full rock band firmly entrenched in his mind, Chasny warped over to Tim Green's Louder Studios with members of Comets as his backing band. He emerged with Ascent, the rollicking realization of the Six Organs full band experience.

No, these aren't those dusty old 2002 moments with the dust blown off. We live today, and so does Six Organs of Admittance! To manipulate the past would change the world forever. Instead, the time line for Ascent occurs on our identical Earth, on the other side of the sun, telescoping the strength and power of that moment in 2002 and it's electri-Six-O after-affects by viewing it through the mind's opera-glass, in the present.

From the opening red storm of "Waswasa" to the sentinel strength of "Even If You Knew" and the sensual lilt of "Visions (From Io)," the sound of this Six Organs is that of full-tilt rock band. The fun and fury of electric Six Organs of Admittance is evidenced in every molten groove.