- January 30, 2013
I've never heard a saxophone used this way before.  Maybe I'm sheltered.  Either way, "High Above the Grey Green Sky," a new piece of music from Colin Stetson, is fascinating, a turbine of saxophone exhalations layered with vocalized melody.  This piece is featured in Stetson's upcoming new album, New History Warfare Vol. 3: To See More Light, which you can read more about below.

According to Consequence of Sound, U.S. release date is April 30th.

"High Above the Grey Green Sky" 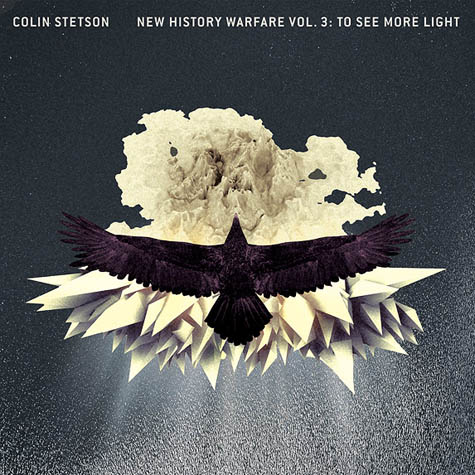 Colin Stetson established himself as an intensely original solo composer and performer in 2011 with the release of the widely acclaimed New History Warfare Vol. 2: Judges. Judges ended up on countless year-end lists and emphatically proved that Stetson’s approach to solo saxophone transcends niche or genre; a unique and emotionally resonant instrumental music with influences as wide-ranging as jazz, metal, pop, soul, drone, industrial, minimalism, electro-acoustic and modern contemporary.

Remarkably, Stetson channels these manifold musical strains into a singularly identifiable and personal sound as a polyphonic soloist who doesn’t rely on looping/layering or multi-track/overdubs technologies. Anyone who has seen Stetson in solo performance can attest to the stunning physicality of his circular-breathing technique and capacity to produce a seemingly impossible palate of multiple voicings simultaneously in real time – making his already beautiful and evocative compositions all the more enrapturing and viscerally human.

New History Warfare Vol. 3: To See More Light is the final installment in a trilogy of solo albums and is Stetson’s most ambitious song cycle to date, again recorded live in single takes with a wide array of microphone positions and again mixed by groundbreaking producer Ben Frost. Colin’s membership in Bon Iver over the past two years has also led to vocal contributions from Justin Vernon for this record, who appears on four songs, with a diverse approach on each, and whose voice constitutes the only overdubbing on the album.

The record’s 15-minute centerpiece, title track “To See More Light”, is the longest piece Stetson has yet recorded and possibly the heaviest: a tour de force of swirling arpeggiation, continuous breathing, pumping valves and vocalizations through the reed of the horn that gives way to a tremendous, screaming, sea-sawing dirge through the song’s final movement. This latter stretch conjures a sort of saxophonic sludge metal, and the album’s heaviosity references other sub-genres of metal as well, most notably in the hardcore blast of “Brute” and the ambient grindcore throb of “Hunted”. In other instances, the album is soulful and even hymnal, especially where Vernon’s vocals play a lead role: opener “And In Truth” (featuring Vernon’s most instantly recognisable contribution, of massed, multi-tracked harmonies), the cover of Washington Phillips’ gospel tune “What Are They Doing In Heaven Today”, and “Who the waves are roaring for” where Vernon delivers some of the more tender and honest vocal performances we’ve heard from him in any context.

New History Warfare Vol. 3: To See More Light is the most cohesive and fully realized of Stetson’s solo albums to date. It should reliably stand as the apotheosis of the New History Warfare trilogy, and certainly signals the full flourishing of Stetson’s unique talents as both composer and performer, pressing his arsenal of virtuosic techniques into the service of vivid, impassioned and conceptually astute songcraft.