In June of 2012, Krautrock superheroes Can issued a three CD collection of unreleased material appropriately dubbed, The Lost Tapes.  I found a copy resting against the new releases wall at A.K.A. Music and figured I'd cross it off my wish list.  Plus, being that I'm not very well versed when it comes to Can, I thought the set would make a good primer.  (The only other Can release I own is their 1979 self-titled album, which I consider hit and miss). 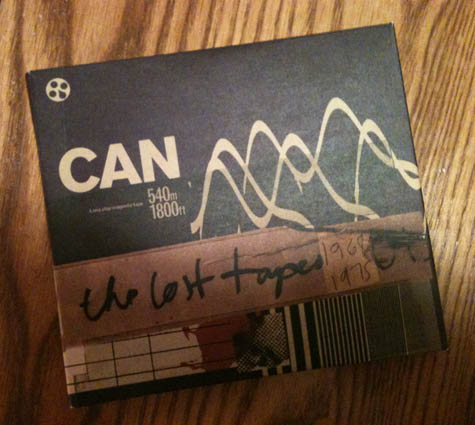 Apparently, the material herein was culled from 50 hours' worth of tapes that had been recorded from 1968 'til 1975, an arduous and likely frustrating task taken on by band member Irmin Schmidt, producer Daniel Miller and musician Jono Podmore.  With a retrospective of this size, there is an immediate and mostly automatic desire to positively assess the release before it's even been completely considered, quality or not.

Having said that, do you ever find that a seminal band's creative runoff is worth a fuck?  There are moments of The Lost Tapes that are very worthwhile: The 16 something minutes of "Graublau" is an entrancing jam piece, "Oscura Primavera" is what Lenny Kaye's record collection might've sounded like had it been haphazardly spritzed with a Sonic Youth protein shake, the Captain Beefheart disposition of "Midnight Sky" and the restless shimmy of "Your Friendly Neighborhood Whore" both get in your head.  Songs like "Waiting for the Street Car" and "Deadly Doris" both build themselves around a single phrase, which does get a little repetitive, but the spontaneity that seemed to inspire the tracks validates their being.

Other times you have grating moments of unforgivable pretension like "True Story" or shapeless sound explorations like "Evening All Day."  Running water seemed meaningful enough for a track called "The Agreement," to which there may be some surrealistic statement that I'm not deep enough to distill.  To be fair, being experimental means that you're not going to win with every decision, but that you're at least going to challenge the FM contingent.

The album is consistent enough, though, to be satisfying and, honestly, The Lost Tapes is an interesting find.  You can tell that a lot of effort was invested into making the multi-disc set as cohesive as possible, a feat considering the seven year span of music and the four+ days' length that had to be disassembled and smartly sequenced.