With crunchy chords that induce a dreamy gaze and generate heavy fields of sonic thrust, Machines Learning has taken cues from Billy Corgan and Kevin Shields and interprets these influences well.  Their new 3-song EP, Success Has Many Fathers While Failure is an Orphan, is immersed in a lush and serrated tone, texture and grace allowed to coexist. 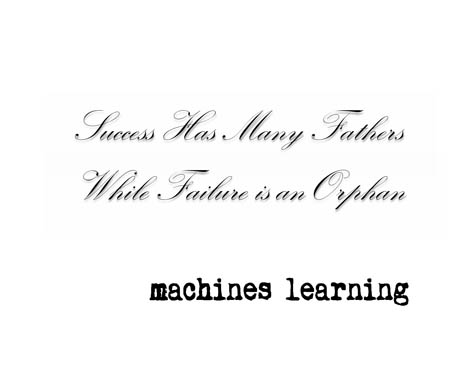 With Machines Learning, there is definitely an appeal to nostalgia for anyone pining for the days of flannel shirts and 120 Minutes, when Loveless was new and legitimate college radio won mainstream attention.  While "Strong Men Also Cry" opens the EP with an Explosions in the Sky styled post-rock instrumental that doesn't seem too out of character with the past decade or so, the following song, "The Island in the Hills," is an exercise in reminiscence: the drum sounds and stride, the trails of charred guitar strums pulsating through its expanse, a melancholic and sincere disposition communicated through relish of tone.

Album closer, "Penntucket Blues," toys a bit with Slint-like math rock, but ultimately unifies the album's sound by injecting the necessary distortion and quickly finishes off the EP.

I believe this is a digital only release, which is unfortunate.  As Machines Learning so ably emulate a time and era that was reliant on the warmth of the analog format, Success Has Many Fathers While Failure in an Orphan seems perfect for cassette or 7."