Cover of the Day: Kvelertak's Meir

- February 05, 2013
The artwork for Kvelertak's upcoming new album, Meir, was released today, which was created by the able hand of illustrator John Dyer Baizley, whose work will likely gain immediate recognition via Baroness and Kylesa.

Also, check out "Bruane Brenn," a new single from Meir. 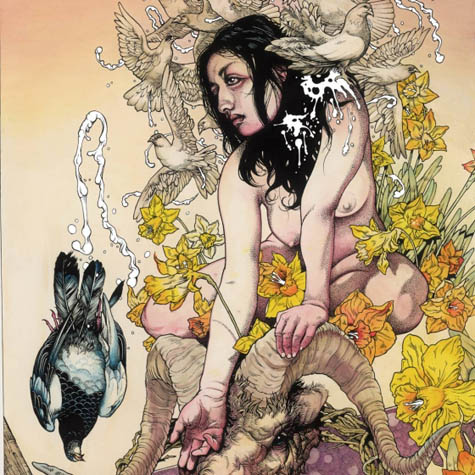 All info, links, tour dates and artwork were provided by Indie Recordings.

Kvelertak have released the new artwork for the upcoming album Meir! The album cover is designed by John Dyer Baizley and can be seen above.

Kvelertak heads out on the ”MEIR” Tour 2013 in April! Check out the dates for the Scandinavian leg of the tour:

Kvelertak have released a new single called “Bruane Brenn” from the upcoming album Meir! The single was premiered on BBC Radio 1’s “Rock Show” with Daniel P. Carter last month. The single is now available on iTunes and Spotify in Scandinavia.

Sincerely,
Letters From A Tapehead
cover of the day metal single upcoming release