Everybody Loves Sausages: An album of covers from The Melvins

- February 08, 2013
Because the Melvins never seem to run out of excuses to release more material, a covers album featuring an admirable list of collaborators will be coming out in April called Everybody Loves Sausages.  Both the Lite and Big Business line-ups of the Melvins are featured and guests include Jello Biafra (Dead Kennedys), Scott Kelly (Neurosis) and Mark Arm (Mudhoney).

All info has been provided by Rarely Unable. 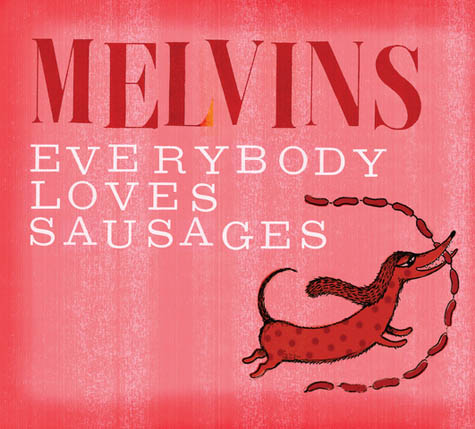 The Melvins return with a 13-track covers album titled Everybody Loves Sausages which is set for an Apr. 29 release in UK/EU via Ipecac Recordings.
"This record will give people a peak into the kind of things that influence us musically," explains Buzz Osborne. "We REALLY like all of these songs along with the bands who actually wrote this stuff because first and foremost we are HUGE music fans."

In a decidedly Melvins approach to a covers album, the band not only selected a unique assortment of songs to cover, ranging from Roxy Music's "In Every Dream Home A Heartache" to Queen's "Best Friend," they also enlisted several friends to take part including Mudhoney's Mark Arm joining them for The Scientists' "Set It On Fire" and Neurosis' Scott Kelly pitching in on a cover of Venom's "Warhead."
While the release is billed as a proper Melvins' album (featuring the line-up of Osborne, Dale Crover, Jared Warren and Coady Willis), there are a handful of songs recorded as the Melvins Lite incarnation of the band (Osborne, Crover and Trevor Dunn): "Female Trouble" (Divine a.k.a. John Waters), "Timothy Leary Lives" (Pop-O-Pies) and "Romance" by Tales of Terror.