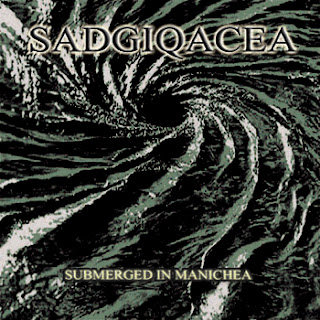 I received word today that Philadelphia metal duo Sadgiqacea, (pronounced "sad-juh-kay-sha"), will be releasing their new album, False Prism, via Candlelight Records.  The former labelmates of my brother's band, Hollenlarm, he introduced me to the music of Sadgiqacea a year or so ago and I developed an appreciation for their 3-song EP, Submerged In Manichea.  As no primer track for False Prism has been made available, I figured I'd take the opportunity to post a track from Submerged In Manichea, album opener "Cerebral Pulp: The Blackening."


All info is provided courtesy of Earsplit PR.

Heavy Planet says, “While destroying everything in their path, Philadelphia-based SADGIQACEA creates an inspiring assault of devastation. Crushing riffs and ambient beauty swirl as the vocals bark… epic and full-on sludge.” Fueled by the duo of Evan Schaefer (vocals/guitar) and Fred Grabosky (vocals/drums), the band has already proven themselves road savvy. Plans are already in order to return to the road for the album’s springtime release. “We are honored to be working with Candlelight Records and ready to spread our music to masses with their support,” says the band. “We are currently planning our second full American tour with our Philadelphia brothers Hivelords for Summer 2013.”

Formed in 2010, SADGIQACEA (pronounced sad-juh-kay-sha) forge a diverse sonic palette that has been likened at times to Neurosis, Intronaut, Weakling, and Kylesa. Musically and artistically, the band draws from a melting pot of influences that together presents a lush yet tension-filled sound. They call it, “music for our trodden minds and sodden souls.” SADGIQACEA has performed alongside 40 Watt Sun, Floor, Cough, Weedeater, Fight Amp, Mose Giganticus, ASG, Funeral Pyre, Hull and countless others in their still short history.

Recorded early September 2012 at Gradwell House in Haddon Heights, New Jersey, False Prism features sparring use of overdubs; the band wishing to preserve the authentic recording quality of the live performance. Writing and performing as a duo, the unique band is committed to their craft. Discussing the album SADGIQACEA says, “The album has themes of inner struggle, spirituality, and our own reflections on the dualistic nature of the evil that we all see and experience in our lives.”

Falm Prism will be released on CD and vinyl (under license to Anthropic Records).