Sub Pop Celebrates 25 Years with a Party (there's a compilation, too)

Sub Pop will turn a quarter of a century this 2013 with a big party and a new compilation that will be released this Record Store Day, Sub Pop 1000. In honor of our 25th anniversary year, we at Sub Pop Records will be hosting an altogether free event, which we’re calling The Silver Jubilee, to be held July 13, 2013 in Seattle’s historic Georgetown neighborhood. Along and surrounding Airport Way, we are fairly certain there will be some combination of… Actual live bands, playing actual live music! Some sort of art-related something or other! Like, in a gallery space, we’re thinking! A record fair-type event! Food! Beer and wine! (The food and beer and wine and soda or whatever, you will have to pay for! These parts are not free!) Good times and opportunities to embarrass yourself and those who’d always hoped for better for you! Plus, bands!

Further details will be forthcoming…until then, PLEASE SAVE THE DATE!

In the Georgetown neighborhood of Seattle, WA

Preceding the The Silver Jubilee, on April 20th (Record Store Day! 4/20: something-something about weed!) we will release Sub Pop 1000, a limited-edition compilation of what we feel are some of today’s most vital artists from around the world. Sub Pop 1000 is comprised entirely of unreleased and exclusive tracks, and will be available digitally and on dazzling, silver-ish vinyl in a limited edition of 5,000 copies. The vinyl will include an 11"x11" booklet and an MP3 download coupon. Sub Pop 1000 was inspired by our landmark 1986 compilation, Sub Pop 100, which championed artists such as Sonic Youth, Wipers and The U-Men. Please find a full tracklist for Sub Pop 1000 below. 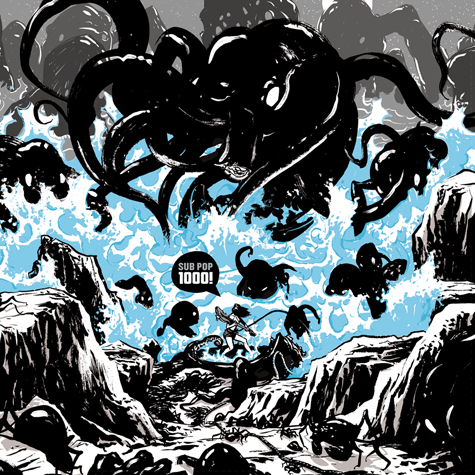