What I Heard This Morning: Snapped Ankles

- February 13, 2013
Received notice this morning of a band called Snapped Ankles, who will be releasing a single in late March called, "True Ecology (Shit Everywhere)."  It's a decent art rock tune and my mind immediately went to Devo for comparison's sake.  The linked version of the song is very short, so I'm assuming it's an excerpt of the single. 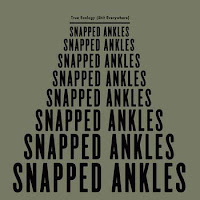 Snapped Ankles throw together a fusion of searing off kilter post-punk but with a healthy blend of dance floor rhythms, synthesized noise and jagged aesthetics.

Snapped Ankles are a London based band who make way out punk music appearing in weird, shamanistic costumes in their incredible live performances. Their music is a collision of art-punk and noise with raw analogue synthesizers and drum machines augmenting the standard guitars and drums setup. Live dates to be announced soon.


Sincerely,
Letters From A Tapehead
art rock post-punk single upcoming release what i heard this morning