As no tracks have surfaced as yet, The National's upcoming new album, Trouble Will Find Me, hasn't necessarily garnered much in terms of anticipation from me.  While I understand their popularity within the band's considerable fanbase, The National hasn't resonated with me enough to gain appreciation.  That's not really a diss on the band themselves as it is an acknowledgment of failure on my part to seek them out and attempt to believe the hype.

Having said that, as I'm a graphic designer by trade, the cover for Trouble Will Find Me caught my attention.  Stark and minimal, but conceptually strong, the image is unsettling, claustrophobic, cold and draped in an air of foreboding.  For me, the cover alone is enough to spark interest in hearing the album. 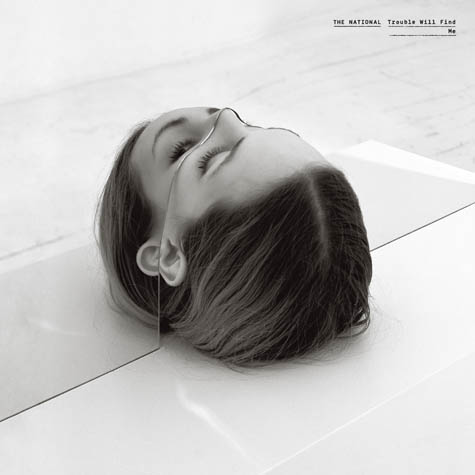 All info on the release and The National's upcoming tour dates are courtesy of Grandstand Media.

THE NATIONAL ANNOUNCE RELEASE OF THEIR SIXTH STUDIO ALBUM TROUBLE WILL FIND ME, OUT ON 4AD MAY 21ST
A NEW DOCUMENTARY TO PREMIERE AT TRIBECA FILM FESTIVAL
WORLD TOUR TO FOLLOW ALBUM RELEASE
[Thursday, March 21st, Brooklyn, NY] Trouble Will Find Me, The National’s new album will be released on 4AD on May 20th & 21st. This is the fifth studio album for the Brooklyn band, and follows 2010’s critical and commercial success High Violet. The album is the most self-assured collection of songs produced by The National in its 14-year career. In an interview with UK’s UNCUT Magazine, front man Matt Berninger described the songs as more “immediate and visceral” than their previous work. Trouble Will Find Me possesses a directness, a coherency and an approachability that suggests The National are at their most confident. The album will be available digitally, on disc, on 180gram vinyl and in a limited edition deluxe boxed vinyl version.
After a 22-month tour following the release of High Violet the band returned home. Regardless of plans to wait to record new music for another year or two, guitarist Aaron Dessner began working on sketches of new songs that the other members were too inspired by to not fully realize. Matt confesses, “For the past ten years we’d been chasing something, wanting to prove something. And this chase was about trying to disprove our own insecurities. After touring High Violet, I think we felt like we’d finally gotten there. Now we could relax—not in terms of our own expectations but we didn’t have to prove our identity any longer.” The results are simultaneously breakthrough and oddly familiar, the culmination of an artistic journey that has led The National both to a new crest and, somehow, back to their beginnings—when, says Aaron, “our ideas would immediately click with each other. It’s free-wheeling again. The songs on one level are our most complex, and on another they’re our most simple and human. It just feels like we’ve embraced the chemistry we have.” The album was recorded at Clubhouse in Rhinebeck, NY. Trouble Will Find Me was self-produced and mixed by Craig Silvey with additional mixing from Peter Katis and Marcus Paquin.
In advance of the release, the documentary Mistaken For Strangers will premiere at this year’s Tribeca Film Festival as the festival opener on April 17th. The film, directed by Tom Berninger, follows The National on its biggest tour to date. Newbie roadie Tom (lead singer Matt Berninger’s younger brother) is a heavy metal and horror movie enthusiast, and can’t help but put his own spin on the experience. Inevitably, Tom’s moonlighting as an irreverent documentarian creates drama on the road. The film is a touching look at two very different brothers and an entertaining story of artistic aspiration.
Following the May 21st release of Trouble Will Find Me, The National will embark on a world tour. Highlights include Brooklyn’s Barclays Center, Bonnaroo Arts & Music Festival, the Greek Theatre in Los Angeles and Red Rocks Amphitheater. Tickets are on sale for most shows announced to date and more shows will be announced soon.
ABOUT THE NATIONAL
Formed in 1999, The National consists of vocalist Matt Berninger fronting two pairs of brothers: Aaron (guitar, bass, piano) and Bryce Dessner (guitar), and Scott (bass, guitar) and Bryan Devendorf (drums). Their first full-lengths, The National and Sad Songs For Dirty Lovers, and a crucial mini-album, Cherry Tree, preceded their signing to Beggars Banquet in 2004. Alligator (2005), included underground anthem “Mr. November,” and raised their profile as the National grew into an incendiary live band. Boxer (2007), featuring songs like “Fake Empire”, “Mistaken For Strangers” and “Start A War,” sold over three times as many copies as its predecessor. The National's 2010 release, High Violet sold over 600,000 copies and was widely recognized for its critical and commercial success around the world. Both individually and collectively The National’s members have been involved in countless artistic, charitable and socio-political pursuits.
TRACK LISTING - Trouble Will Find Me
1). I SHOULD LIVE IN SALT
2). DEMONS
3). DON’T SWALLOW THE CAP
4). FIREPROOF
5). SEA OF LOVE
6). HEAENFACED
7). THIS IS THE LAST TIME
8). GRACELESS
9). SLIPPED
10). I NEED MY GIRL
11). HUMILIATION
12). PINK RABBITS
13). HARD TO FIND
TOUR DATES
5/16: State Theater Ithaca, NY
5/26: Boston Calling/ City Hall Plaza Boston, MA
6/05: Barclay's Center Brooklyn, NY
6/06: Merriweather Post Pavilion Columbia, MD
6/07: Mann Center for Performing Arts Philadelphia, PA
6/08: The National Richmond, VA
6/10: Red Hat Amphitheatre Raleigh, NC
6/11: Stage AE Pittsburgh, PA
6/13: Lachine Canal Montreal, Canada
6/14: Yonge Dundas Square Toronto, Canada
6/15: The LC Pavilion Columbus, OH
6/13-16: Bonnaroo Music & Arts Festival Manchester, TN
6/21: Hurricane Festival Scheessel, Germany
6/22: Southside Festival Neuhausen ob Eck, Germany
6/25: Cirque Royal Brussels, Belgium
6/28: Live At The Marquee Cork, Ireland
6/30: Parco Della Musica Rome, Italy
7/01: City Sound Festival Milan, Italy
7/02: Salata Zagreb, Croatia
7/14: Bunbury Music Festival Cincinnati, OH
8/06: Roy Wilkins Auditorium St. Paul, MN
8/10: Greek Theatre Los Angeles, CA
9/17: Red Rocks Amphitheater Morrison, CO