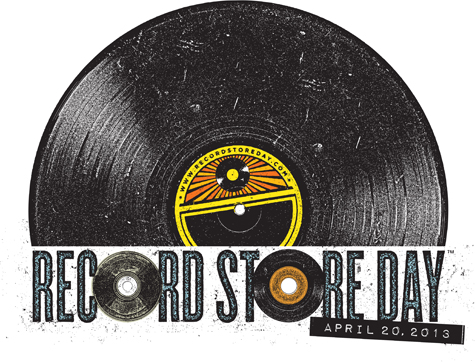 I'm still waiting on the big list of Record Store Day exclusives, which is supposed to be releases sometime today.  In the meantime, Sub Pop has divulged some RSD-related info and posted a trailer for the new Sub Pop 1000 compilation.

I guess it goes without saying that all info comes courtesy of Sub Pop. 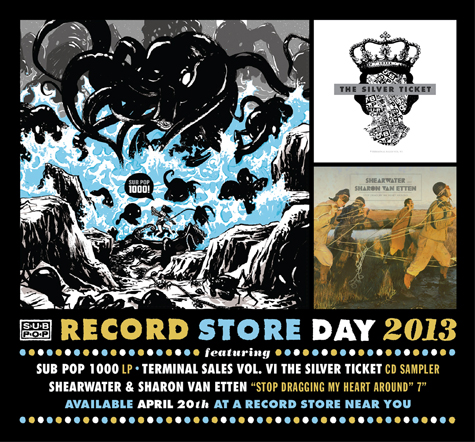 We at Sub Pop will celebrate the hallowed musical holiday known as Record Store Day with a trinity of releases, available on April 20th.

Leading the pack is the almighty Shearwater, who joined forces with friend, tour-mate and Jagjaguwar recording artist Sharon Van Etten to release the “Stop Draggin’ My Heart Around” b/w “A Wake for the Minotaur” single, a limited-edition, 2013 Record Store Day exclusive. “Stop Draggin’ My Heart Around” was originally recorded for an AV Club “Undercover” session, and is, of course, a cover of the 1981 duet by Stevie Nicks and Tom Petty; while “A Wake for the Minotaur” is a new, previously-unreleased original. The 7” is housed in a handsome double-gatefold sleeve that must be seen to be believed (and then purchased and owned to truly be enjoyed).

Via the A/V Club:

Secondly, Record Store Day is the release date for Sub Pop 1000, a limited-edition compilation of what we feel are some of today’s most vital artists from around the world. Sub Pop 1000 is comprised entirely of unreleased and exclusive tracks, and will be available digitally and on dazzling colored vinyl in a limited edition of 5,000 copies. The LP will include an 11"x11" booklet and a MP3 download coupon. Sub Pop 1000 was inspired by our landmark 1986 compilation, Sub Pop 100, which championed such groundbreaking artists as Sonic Youth, Wipers and The U-Men.


Lastly but not leastly, Terminal Sales, Vol. 6: The Silver Ticket is our 2013 label sampler. It’s a free, 19-track CD sampler featuring a heaping helping of new and in some cases somewhat rare tracks from the likes of Low, Shabazz Palaces, Mudhoney, Father John Misty, Still Corners, Pissed Jeans, Daughn Gibson, and 13 others. In keeping with Sub Pop tradition, the sampler is extravagantly packaged and will likely conjure thoughts like, “Wow!” and, “What were they thinking, giving this away for free?”

Please find tracklistings for all three releases below.

More About Record Store Day:
This is the one day each year that all of the independently-owned record stores come together with artists to celebrate the art of music. Special vinyl and CD releases, and various promotional products, are made exclusively for the day, and hundreds of artists in the United States and in various countries across the globe make special appearances and performances. Festivities include performances, cook-outs, body painting, meet & greets with artists, parades, DJs spinning records, and on and on. Metallica officially kicked off Record Store Day at Rasputin Music in San Francisco on April 19, 2008 and Record Store Day is now celebrated the third Saturday every April. http://www.recordstoreday.com/Home