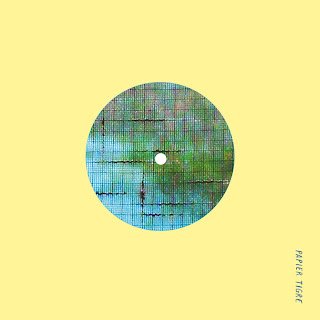 Appealing to the math rocker raised on Slint or Shudder To Think, Papier Tigre's upcoming single possesses the splintering chords, thudding low end and vocal harmonizing perfectly suited for 45 RPMs.  The militaristic tap dance of the A-side, "Personal Belongings," allows for interesting builds and retraction of volume, culminating in a chunky mass of fuzztone and a howling six-string.

"The Difficult Age" opens up with a momentary shot of intensity and dials back into a slowed stream of low level guitar phrasing, melody at play before the song shifts into loose distortion.  Some of the chords employed recall Fugazi or Jawbox, those back and forth guitar swipes could either qualify as perfectly discontent or effectively out of tune.  It's an evocative release, but Papier Tigre puts a distinctive spin on it, (excuse the pun), crafting two very good sides diverse enough to exhibit range and avoid monotony.