- April 21, 2013
Does the aftermath of Record Store Day always feel like the day after Christmas, or is that just me?  For me, the day's approach inspires a wealth of excitement followed by a ho hum sigh once it's over.  But, the spoils await, and eventually I'll have the chance to dig in, throw on my new acquisitions and listen.  In the meantime, though, here are a few thoughts:

This year, I tagged along with some friends to Double Decker Records in Allentown, PA., followed by a trip to Princeton Record Exchange in Princeton, New Jersey.  I was up this morning at 5:30AM when I saw a Facebook post from Double Decker claiming there were two shoppers already in line.  The post had been made around 4:30. 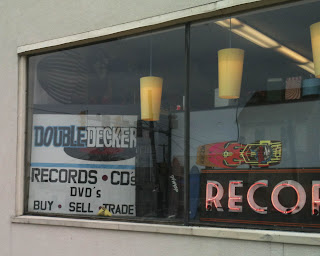 I love my records as much as anyone, hence my annual participation in Record Store Day and my year 'round support of independent record stores, but nothing on this year's list of RSD Exclusives was worth being up and in line almost four hours before the store opened.  In fact, even after being on the road by 6AM, we arrived maybe fifteen minutes before Double Decker opened and really didn't miss out on anything.  Another friend we were meeting at the store was there earlier, and he was nice enough to grab Things Fall Apart by The Roots for me in case I couldn't get a copy in time.  (Cheating?  Maybe.  Whatever.  There were two or three copies left by the time I got to the RSD goodies at the back of the store, anyway.)

The line traced a perimeter around the inside of the store and it was slow enough that you could check out their inventory.  The first thing I snatched up was a copy of Madvillian's Madvillainy LP, that brilliant 2004 release from MF Doom and Madlib, which was recently reissued on vinyl.  My budget was limited, so I didn't get too carried away.  I looked at albums from Bill Withers, Curtis Mayfield and The Last Poets, not to mention a $50 copy of Sunn O)))'s Black One.  I didn't want the exclusives to necessarily dictate how I was going to spend my money, but I had wants and they needed to be attainable.  So, just about everything I picked up was put back.  I also found a $1 copy of the split 7" from Cap Pas Cap and Marnie Stern.

I considered the A Place to Bury Strangers release as well as the Thurston Moore/Leslie Connors album, but wasn't completely sold.  Back On Black had reissued albums from Megadeth, Judas Priest, Slayer, Dio, Iron Maiden and Burzum for the event, but they were all overpriced at $35 to $45 apiece, which would've emptied my wallet very quickly.  I picked up a copy of Public Image Ltd's First Issue 7," which is packaged as it was in 1978 with a replicated version of the original newspaper.  I also found Wire's new album, Change Becomes Us.  There was one left.

Once we'd paid, it was suggested that we try the Princeton Record Exchange just for the hell of it.  I'd never been there, so it sounded like a good idea.  Figuring it wasn't too long before noon and that it was likely most of the super-salivating record scavengers were done for the day, we didn't think there would be much of a wait to get in.  But, there was.

For the reissue of Mad Season's Above, I stood in line for an hour and twenty minutes.  It was worth it, but I decided that I wasn't really interested in having to do that, again.  Without getting into one of those cynically charged diatribes about the exploitation of consumers, the propagation of eBay-minded philistines looking to cash in and the over-commercialization of what had initially been meant to save the record stores from the very same industry that now feigns interest because it's realized the buck or two it could make, the simple act of shopping at these stores is what will keep them alive.  For music lovers, there shouldn't be any need for a day to recognize the importance of keeping the stores alive.  I would rather be able to shop casually than miss out on the majesty of the store itself simply for the purposes of obtaining limited editions of this or that. 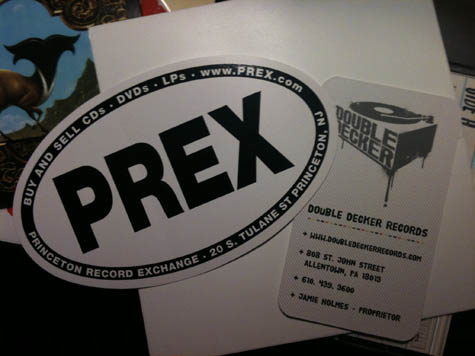 However, I remain a proponent for Record Store Day, because, if the event has enabled these to stores to keep their doors open and their shelves stocked, then it's worth it.  Opportunists are opportunists.  Their rewards are superficial.