- May 16, 2013
Earsplit PR, the organization that has so generously provided me a wealth of music over the years, is sponsoring a Philadelphia-based event to benefit the Philadelphia Animal Welfare Society, also known as P.A.W.S., which is a no-kill animal shelter.  The music and arts festival is being co-hosted by the webzine, Blow The Scene.

Please find event info below, which was brought to me courtesy of Earsplit PR. 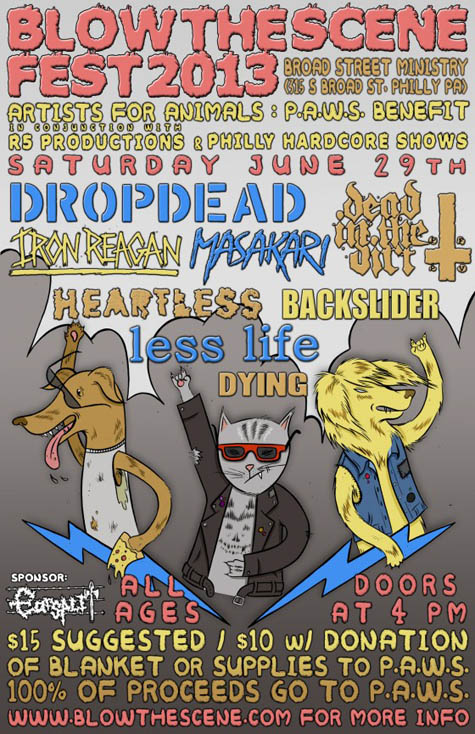 This June, Philadelphia-based music/arts webzine Blow The Scene is co-hosting a massive benefit drive including both an underground art show and killer music fest to aid in funding a no-kill animal shelter and rescue for P.A.W.S (Philadelphia Animal Welfare Society).

Blow The Scene editor-in-chief Joshua T. Cohen and Richard Stockton College art professor Ryann Casey have teamed up to host both the Homeward Bounds Art Benefit Show as well as the first annual Blow The Scene Fest 2013: Artists For Animals, with Earsplit now the official sponsor of the two-part funds drive.

The Homeward Bounds Art Benefit Show portion features works by over 50 artists who have contributed mixed media pieces being sold for charity beginning TODAY, running through July 10th at Philadelphia vegan eatery and art gallery, Grindcore House. In addition to the art show, the volunteers are constructing an “adoption wall” that will chart the progress of the current animals up for adoption at P.A.W.S.

BLOW THE SCENE FEST 2013: Artists For Animals portion will take place on June 29th, 2013 at Philadelphia’s Broad Street Ministry, now with a confirmed lineup of motivated outfits including DROPDEAD, DEAD IN THE DIRT, IRON REAGAN, MASAKARI, HEARTLESS, BACKSLIDER, LESS LIFE and DYING. The gathering will also feature artist displays, non-profit information and tabling, monetary and physical item donations, information booths, and much more. Admission to the all-ages fest will be $15, or $10 with a donation of blankets or supplies for P.A.W.S.

100% of the proceeds from these fundraisers will go to P.A.W.S., and if you do not live in the area and plan on attending either Philly-based event donations can be made online now.

For more info on the Blow The Scene Fest 2013, click HERE.

Sincerely,
Letters From A Tapehead
letters from a tapehead is socially conscious philadelphia