- May 03, 2013
I remember, as a matriculating Catholic school student of maybe 11 or 12, looking at a full-page ad in some metal magazine (could've been Rip or Hit Parader) for Slayer's South Of Heaven and being simultaneously fascinated and mortified by its cover illustration.  The various goat heads mixed with swipes of blood and darkly hued chapels weren't necessarily as corrupting as they were wildly infused with otherworldly magic, depictions that contradicted the ideological deity I'd been praying to every Sunday.  Cut to a few years later, and I'm walking to my bus stop while blaring a cassette of Seasons in the Abyss I'd borrowed from a friend into my ears, hoping "War Ensemble" would end before I reached the landing and had to take off my headphones for the sake of conversation.  There were many days when I just wanted to funnel music into my brain and be left alone. 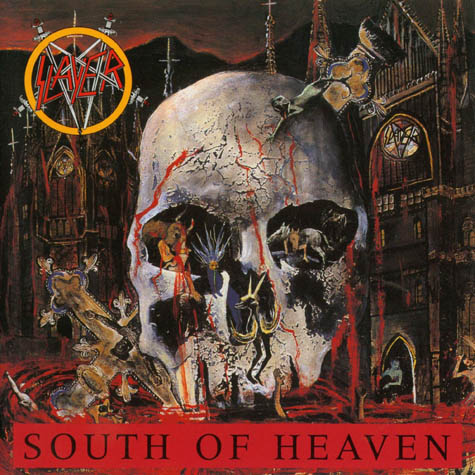 In my little suburb, late 80s-early 90s, it was crucial to reject our insular environment and try and form an identity that was at odds with everything around us.  Evil and/or aberrant imagery was attractive, especially in line with my Catholic upbringing and subsequent rebellion, and music had to reflect both an internal and external conflict in order to mean anything.  It's understandable why a band like Slayer would resonate so heavily with those of our ilk, their fascination with the occult and seeming disdain for authoritarian dogma, not to mention their sonic brutality and speed, relatable in many ways.  Slayer birthed musicians out of some of us and devoted fans out of the rest of us, so the recent passing of Jeff Hanneman was felt.

While I can't personally claim to have been anything other than a casual fan, far from the disciple some of my friends have been, I can still point to Seasons In The Abyss and South of Heaven as having had some impact on me growing up.  I can also state with no hesitation that, out of the original four horsemen, Slayer stayed focused on what they did well and remained successful without slowing down.

Flashing the horns for eternity and grateful for years of aggression.