Liars: "I Saw You From the Lifeboat" (Video)

- May 20, 2013
New song and video from Liars along with tour info, a mini-documentary, special occasion shows and a contest.  Are they not giving?

Liars' last album, 2012's WIXIW, was reviewed at No Ripcord.

All info is courtesy of Mute. 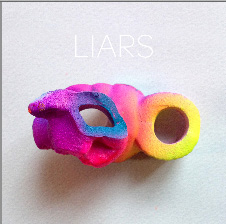 Before LIARS embark on their European tour next week, they will be playing two very special shows in New York this weekend. They will perform at The MET in the Temple of Dendur on Saturday, May 18th and Le Poisson Rouge on Sunday, May 19th. The MET show is sold out, but tickets are still available for Le Poisson Rouge show – grab them while you can!

As they get ready to head out on the road, they are also sharing a special surprise: a free download two brand new tracks – “I Saw You From The Lifeboat” and “Perfume Tear.” They have also created a unique film, documenting the past few years, offering a rare insight to the life Liars. Check out the video now to sign up for your free downloads!

Video for “I Saw You From The Lifeboat”

Everyone that receives the download will be entered into a draw to win a piece of original artwork created by Liars.

The two tracks are solitary from any album, simply a freedom of the bands creativity. Explains Angus, “After releasing WIXIW and returning home from touring there was a palpable sense of creative relief and release. We relished in the opportunity to make stuff under no real directive and began almost immediately to produce all kinds of unrelated works. It’s a great position to be in creatively so we decided to share a small portion of the results with you today. Both of these songs happened almost instantly, and, in sharp contrast to the music we produced for WIXIW, were not labored over or scrutinized. It’s been great for us to recall the immediacy and excitement of creating music on the fly - unrestricted by subject matter and void of preoccupations about how it should 'work' in the greater context of things.”