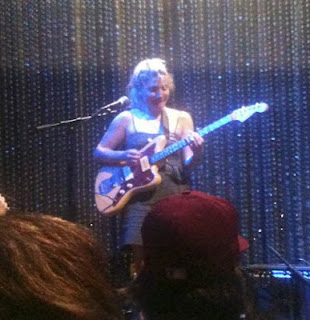 Marnie Stern ended the American leg of the Who Gives A Hoot '13 tour in Philadelphia on what wound up being a very rainy Friday night.  Indoors at Johnny Brenda's, we were being charmed by Stern, who amusingly attributed her lack of voice to an excessive helping of blow jobs during the tour, (the real reason being a drunken night of karaoke, a factoid publicly disclosed by bassist Nithin Kalvakota), and demanded that the crowd relieve themselves of their clothing (a couple t-shirts made it to the stage).  Touring drummer, Joe Wong, had no trouble shedding his t-shirt for the cause.

Yes, the banter always wins at a Marnie Stern show.  But, so does the music.

Since 2009, I've been to every Stern event in Philly, (the ONE exception being that Tera Melos show that I'm still annoyed I missed), and with every event she's become a bigger name who draws larger audiences.  Her newest album, The Chronicles of Marnia, has seemed to garner more of a public response than any of her previous albums, (the volume of reviews, interviews and show coverage has been pretty significant), and it was obvious on Friday night that the majority of us in the crowd had become very well acquainted with that album.* 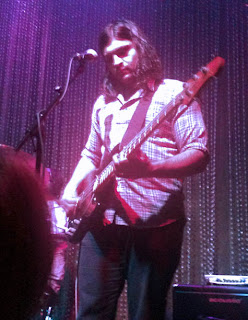 She's also become a better performer, her live show now rivaling her studio output.  I wanted to suggest to her, for instance, that the version of "The Crippled Jazzer" they'd used to cap off their set initially should be put out as a live track.  The audience had more or less soaked that up, the outro extended into a very arena-worthy percussive throw down.

But, even from a technical standpoint, the playing was tight.  Stern translates her signature guitar style on stage with fluidity and ease.  It seemed to almost require no concentration on her part, just the hours of studied dexterity she's applied to her instrument and the scrawl that had composed the evening's set list, which rested on the floor of the stage.  The writing was small enough that she had to keep bending over to read what the band was playing next.

Focused mostly on Chronicles, their set went as far back as This Is It and I Am It and You Are It and So Is That and He Is It and She Is It and It Is It and That Is That ("Transformer," "The Crippled Jazzer") and her 2010 self-titled album ("For Ash," "Transparency is the New Mystery" as the encore**).  Those were, of course, the songs I knew best, despite my relative familiarity with the new album.  Every song, though, sounded great and Stern, voice or not, had a radiance to her that could've been attributed to the following:

2). That a break from traveling was on the horizon and some proper sleep was in her future.

3). That she was playing on stage in front of a very receptive and electrified crowd.  Honestly, I can't imagine that it gets much better than that.

* Side note: Every Marnie Stern release I own aside from In Advance of the Broken Arm and the Cap Pas Cap split has been purchased at a show.  I'd held off on picking up Chronicles thinking I'd score the vinyl at the merch table.  However, since it was the band's last night on tour, the vinyl had sold out.  I, instead, picked up the Dog Daze cassette.  This is yet another indication of Stern's rising popularity.

**Another side note: Following the encore, Wong had thrown his drumsticks into the crowd and they'd apparently come in contact with the face of a correspondent for XPN's The Key, who wrote all about it.
concerts experimental indie marnie stern math rock philadelphia rock