- June 03, 2013
A new Chelsea Wolfe album, Pain Is Beauty, will be out in early September.  No singles yet, but a trailer for the album has surfaced that you can view below. 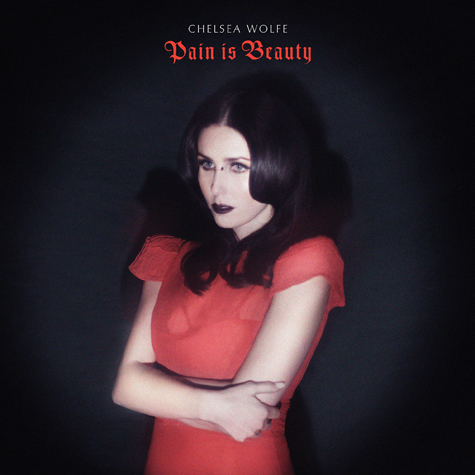 How often nowadays do we read of an artist's "intensity", or their rhetorical, one-of-a-kind individuality? Journalistic hyperbole routinely contorts the mundane into the "epic", the tired into the inspired, all the while heaping praise on performers as seemingly vacuous and generic as possible. Navigating the landscape of contemporary alternative music can be an exercise in redundancy; true visionaries and boundary-pushers are few and far between. Enter Chelsea Wolfe. To simply call Wolfe unique would be an understatement. Even among her peers in the so-called "drone-metal-art-folk" scene she's an icon, a stand-alone singer/songwriter whose fully-formed aesthetic and haunting timelessness appear almost without effort.

Originally hailing from Northern California, Wolfe's formative years were spent tinkering in her country musician father's home studio, crafting "Casio-based gothy R&B" songs. For years, however, she lacked the confidence to share her creations. Then, in 2009, an overseas excursion as part of a nomadic performance troupe ignited her passion for performing and initiated a renewed interest in writing and recording. A year later she emerged with a breathtaking debut album, 2010's The Grime & The Glow, immediately establishing herself as the focal point in a wave of new artists intent on blurring the lines between established alt-rock memes. Marrying the gentle intimacy of folk, the atmospheric voodoo of death rock, and the bleak, sullen nihilism of black metal, Wolfe's sound effectively cast a genre all her own: a cavernous rumble, marked by stuttering drums, ethereal synths, and a wash of guitar, all very much in the service of one of the most hypnotic, celestial voices in modern music.

In 2011, Wolfe relocated to Los Angeles and recorded her second album, Apokalypsis, which was subsequently met with critical adoration. In 2012, she signed with L.A.-based Sargent House and released Unknown Rooms: A Collection of Acoustic Songs, less an "unplugged" digression than an exploration of the sonic possibilities afforded by peeling-back some of what makes her characteristic sound so lush. The results, as NPR's All Songs Considered noted, are "every bit as ethereal and haunting as past work that mines the darkness of artists like Burzum and Leonard Cohen in one breath". On the heels of the acoustic album, Wolfe released an EP of covers by the enigmatic anarcho-punk band, Rudimentary Peni, entitled Prayer for the Unborn. This out-of-left-field development served not only to illustrate Wolfe's artistic solidarity with some of underground music's most fringe elements, but also to underscore her single-minded commitment to her vision, and nobody else's.

Now, in 2013, Chelsea Wolfe is set to unveil her third studio album, Pain is Beauty. A self-described love letter to nature, many of the album's 12 tracks veer in a decidedly more electronic direction than previous recordings, while at the same time capitalizing on Wolfe's trademark penchant for the morose and otherworldly. As she explains, the album "becomes an exploration of ancestry, how the mythology, landscapes and traditions of our ancestors affect our personalities today." She continues, "Honesty is what initially drew me to music, and I've been more honest and open with myself than ever through these songs. There is peace in truth. There is clarity in solitude. And there is power within simplicity and focus. Love is not always easy. Tormented love is something I understand more than society's skewed idea of what love should be. Love is indelible, severe, earnest, merciful. To push forward against the odds is to make history".

Fleshed-out by bandmates Ben Chisholm (Wolfe's co-producer), Kevin Dockter, and Dylan Fujioka, Pain is Beauty's dozen tracks form a coherent whole which never lingers too long in any one territory. Aptly-titled opening track "Feral Love" circles the listener, brooding with measured severity, its imminent threat instead surrendering to an encompassing swell which just as quickly retreats into silence. The plodding dirge of the brief "We Hit a Wall" soon gives way to the sinuous electronica of "House of Metal", whose fairytale keyboard and synthetic strings provide a purpose-driven sense of tranquility amongst the strangeness of nature. "The Warden" continues this theme, it's flittering shards of syncopated minimalist pop a crystalline canvas for Wolfe's mesmerizing croon. "Destruction Makes the World Burn Brighter" is a swinging, reverb-readied anthem, it's relentless "Who's that girl/use that gun" chorus over almost as soon as it begins. "Sick" feels heavy by comparison, despite the total absence of percussion, its breathy minimalism giving way to the uplifting refrain "we carry on." The album's most overtly political track, "Kings," is a buzzing examination of the status quo, bookended by "Reins", whose waxing forward-pull effectively channels an atmosphere reminiscent of the darkest of early eighties' post-punk all the while exploring the concept of closeness from times past to modern days: "These horses, they pull me…these wires, they pull me…to you." Next is "Ancestors, the Ancients", an impassioned plea to "holy ancestors" amid a swooning, heady mixture of thundering drums and understated guitar. The following track, "They'll Clap When You're Gone", finds Wolfe at her most vulnerable. "I carry a heaviness like a mountain", she confesses. Track eleven, "The Waves Have Come", unfurls itself methodically, pushing past the 8-minute mark (whereas the other tracks hover around 3-4 minutes). A heartbreaking story of love, loss and death in a natural disaster, Wolfe's lyrics provide a poignant summation of themes prevalent across the album: "We don't need physical things to make us feel and make us dream. When earth cracks open and swallows then we'll never be tired again, and we'll be given everything the moment we realize we're not in control". Album closer "Lone" provides a tentative parting of ways necessitated by the formalities of physical media. "When the sorrow is all gone", breathes Wolfe, "it is buried in the sun".

Chelsea Wolfe makes records that transcend time, avoid pigeonholing, and most importantly, allow a glimpse into the soul of a true visionary. Her work is free of the contrivances of lesser artists, the trivial "concepts" and pandering for attention at any cost. Hers is a dignified way of doing things, proven without any doubt by the sheer quality of her work. Pain is Beauty presents not so much an auditory experience as it does an encompassing atmosphere with which the listener can surround themselves, a soul-stirring link with infinity.