Cattle Decapitation: "An Exposition of Insides"

- July 12, 2013
Because it's now less than two hours till weekend time, (and I know what hard working, dedicated and tireless lot read my piddly, self-aggrandizing and annoyingly positioned to be "in the know" brand of bullshit), it seemed like the right thing to do to offer you this single from Cattle Decapitation. Why? Because that's what nice motherfucker I am. Plus, ignoring the obviousness of what some may consider plain obnoxious, this single, which is titled "An Exposition of Insides," happens to be the Japanese-only inclusion of the band's album, Monolith of Inhumanity, which was released in May of 2012.  Citing the dismay of many of the band's American fans, Cattle Decapitation is issuing the "Your Disposal" 7" and including this rarity as its B-Side. 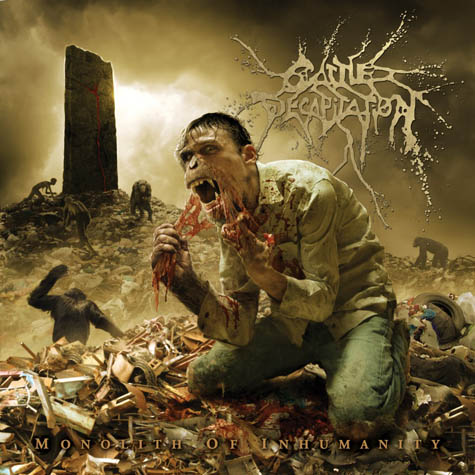 The band will be touring as part of this year's Summer Slaughter tour, sharing the bill with the likes of The Dillinger Escape Plan, Animals As Leaders, Periphery, Norma Jean, The Ocean, Revocation and Aeon.

All info, links and tour dates are courtesy of Earsplit PR.

CATTLE DECAPITATION will be releasing a 7" single this Summer. "Your Disposal" features the B-side, "An Exposition of Insides," which was previously available only as a Japanese bonus track on the band's most recent album, Monolith of Inhumanity. The single is available (both black and clear vinyl) for order on-line on indiemerchstore.com for $5.50, as well as in a bundle with a T-shirt for $18.99. Pick up your copy of the single HERE, and check out the T-shirt bundle HERE. Fans attending this year's The Summer Slaughter Tour can grab their copy at the band's merch booth throughout the tour.

Vocalist Travis Ryan comments: "We noticed a lot of people were dismayed to find out there was a track available out there on a Japanese version of Monolith of Inhumanity that nobody outside of Japan had ever heard before. When it hit YouTube, that's when we started getting emails from fans. We noticed the lyrics weren't inside that version or available anywhere at all so that gave us the idea of throwing it on a B-side and releasing a 7" vinyl single for 'Your Disposal' with the song 'An Exposition of Insides!' We feel that Monolith is the mother of all of our releases so far and I thought it'd be funny to make it look like she just squirted out a baby and that's what this little guy looks like. Just in time for Summer Slaughter!"

The most extreme tour of the year has returned with its most devastating and anticipated lineup yet. The 7th annual Summer Slaughter Tour, presented by Indie Merch Store, ESP and Guitar World, is now officially slated to run from July 19th through August 24th. It features such heavyweights as The Dillinger Escape Plan, Animals As Leaders, Periphery, Norma Jean, Cattle Decapitation, The Ocean, Revocation, Aeon and more. See dates below: