This new single from Lumerians' upcoming album, The High Frontier, ably generates the nervous energy that the video is attempting to match visually, its repetition, noir-ish narration and sudden changes in tempo, not to mention the theremin-like buzz that travels through its every melody (the song is riddled with science fiction), enough to heighten the senses.  Post-punk still manages to sound fresh well over thirty years past its point of origin, so long as it's done well.

Check out the video, listen to the song and then read the info that was happily provided by Life or Death PR.

Lumerians - Life without Skin from m m on Vimeo.


LUMERIANS SHARE NEW VIDEO FOR "LIFE WITHOUT SKIN" VIA NOISEY 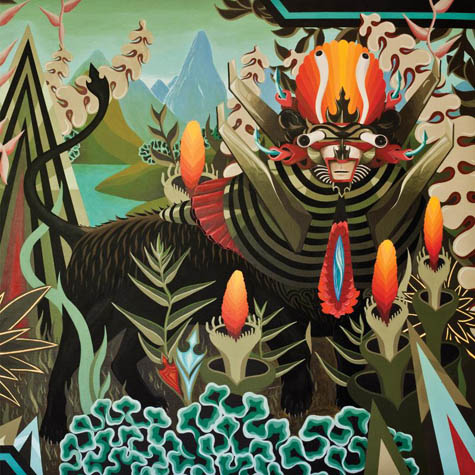 In advance of the release of their new album The High Frontier, Lumerians are sharing a new video for their single "Life Without Skin." The video documents a young woman's perilous journey through the city at night, which Noisey calls "an apt visual accompaniment for the San Francisco band's distinctive psych rock." The High Frontier drops on Partisan records August 27th.

About Lumerians:
Between the vast expanses and disparate extremes of space lies The High Frontier: a term coined by Gerard K. O'Neil in his illustrated 1976 book depicting human colonization of space.

It's a cacophony of sound in which Lumerians acknowledge the role noise and rhythm has always played in transcendent and ecstatic rituals the world over. From the repetitious drums of tribal animists to the penetrating electronic pulses of neon dance clubs, The High Frontier sets scope outward, points blindfolded at a star map and sets off full blast without making course corrections.

As the first video to make its way online, "The Bloom" reveals a band who, not content with the intensity of the space rock sounds, also believe that sound & vision are parts of a greater whole. Since forming in 2006, Lumerians have gained notoriety for their intense performances, stunning live visuals and thematic otherworldly releases.

The six tracks and 33 minutes that make up The High Frontier were recorded and produced in Lumerians' self-built studio/brewery: a room housed in a converted store-front church in a neighborhood affectionately referred to as the "Murder Dubbs".

Lumerians is Tyler Green, Chris Musgrave, Jason Miller and Marc Melzer. Formed in early 2006 while most of the members were working at an experimental music label in San Francisco, their shared affinity for Krautrock and esoteric occult mythologies resulted in after-work jam sessions and recording.

After self-releasing their debut EP in 2008, they signed to Knitting Factory Records in 2011 for their debut LP release Transmalinnia - a record which, during the two years it took to record, was almost entirely scrapped and re-recorded several times. In 2012 supplementary small-pressing instrumental records Transmissions from Telos Vol. IV and The Weaning and the Dreaming quickly sold out in the hands of collectors.