- July 10, 2013
A quick flash of artful whut: Monogamy Party's "Crimes" is the first single from the band's upcoming debut, False Dancers.  Grazing the No Wave propensity to whir, whine and wince, Monogamy Party's up tempo barrage of noise rock stops and starts, motors and twists.  It's brackish and aggro, strange enough not to readily categorize "punk" or "problem child rock." 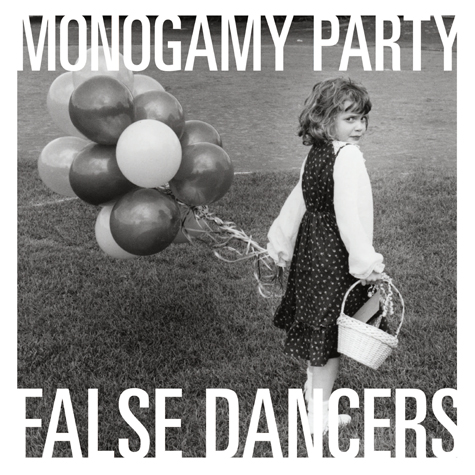 False Dancers will be out September 17th.

All info is provided courtesy of Good to Die Records.

July 10th, 2013, Seattle - The original trio of Monogamy Party - Kennedy on vocals, Yos-wa on bass, and Keith on drums - was a powerful enough entity. Just take another spin through their impish and intense 10" EP Pus City right now if you don't believe us. Or, just listen to the good people at Seattle Weekly who called the record a "gritty, well-crafted noise rock wonderland." Now, just imagine injecting even more tumult into the mix via the Party's new guitarist Ricky. The results are downright volatile.

Again, you needn't take our words for it. You just have to crack open the bristling white-hot energy that is the band's debut full-length False Dancers to experience it firsthand.
Recorded with the help of Austin Thomason (Jeremy Enigk, Pleasureboaters) and his mobile Mt. Plyushkin Studios, the band retreated to Granite Falls - the meth capitol of Washington State - to a property that was the former home of a hoarder who lived with a swarm of rabbits and peacocks. "It's crazy up there," says Kennedy. "Abandoned cars and garbage and metal everywhere. There’s even a pack of wild roosters roaming around."

The joy and chaos of that experience blazes out of these 10 songs, with Ricky's screeching guitar lines cutting through the thick syrupy sounds stirred up by the rhythm section. While the vocals flux between controlled narration demanding attention and squeals of frustration as Kennedy struggles to keep up with the rest of the band. They may cull from more serious influences like early Sonic Youth, Black Eyes, and Arab on Radar, but the sound of False Dancers is a sweat-soaked, drug-fueled dance party.

"The mission of the band," says Kennedy, "is to create a sex positive, drug positive experience amid the frustration and chaos that constantly surrounds us."