What I Heard This Morning: Outer Gods & Orbweaver

Like ketchup blood and styrofoam horns, like filmic depravity played out on scarred celluloid, the aurally charged "Beyond the Crimson Gate," a single (of sorts) by Outer Gods, relishes in the grim and brings to mind age old horror at its most gratifying.  A gruesome twosome if you will, (members The Flail and The Wrathe… no joke) Outer Gods is releasing an album at the end of July titled Light Dims Eternal via Domestic Genocide. 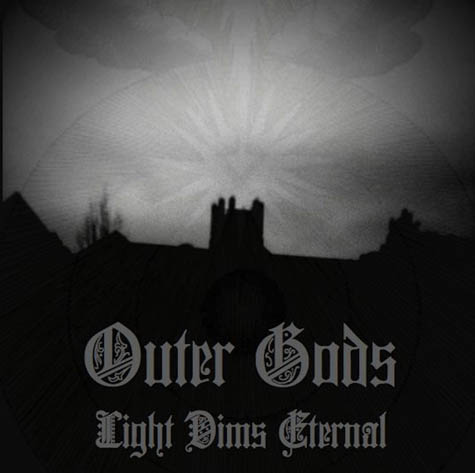 Check out the single and the video below.  All info comes courtesy Earsplit PR.

“The dream was marvelous but the terror was great; we must treasure the dream whatever the terror; for the dream has shown that misery comes at last to the healthy man, the end of his life is sorrow.” – The Epic of Gilgamesh

Atlanta post blackened noise duo OUTER GODS recently joined forces with eclectic label imprint Domestic Genocide for the release of their Light Dims Eternal debut. Offering up five sordid tones of torment, OUTER GODS conjure an absorbing audio voyage, their dismal soundscapes as corrosive as they are cathartic. Written and recorded and written by the band and mastered by James Andrew, Light Dims Eternal will be unleashed on July 30,, 2013.

In the meantime, sample the "Beyond the Crimson Gate" video single at THIS LOCATION.

Light Dims Eternal Track Listing:
1. Future Decay
2. Due Sabatti
3. Beyond the Crimson Gate
4. Blessed Be the Host of Sorrow
5. From Behind The Walls, She Heard a Voice Like an Angel

The paths travelers take to find their way in this life are as complicated a labyrinth as the mind itself. But forever will a true traveler move onward. Musicians take to backroads and lonely highways as well. It’s the fate of any dreamer, to never truly stand still.

OUTER GODS is a duo, two musicians and travelers who somehow found each other amidst the modern monotony and machinery. The Flail raises musical tones from guitar and keyboards. The Wrathe culls ethereal sounds from electronics and synthesizers. Though they had played together in various noise and avant-garde projects around their hometown of Atlanta, they started anew with OUTER GODS in the murky winter of 2011. When they took on their new titles as the Flail and the Wrathe, they also adopted a new philosophy. Over the course of 2012, the band embarked upon the release of two EPs -- The Mountain’s Den and Mael Medusa -- both of which were self-produced in the seclusion of the band’s private sanctuary over the course of many months.

And, this just kicks ass.

Orbweaver's "Crystal Prisms," the new single from the band's upcoming EP, Strange Transmissions from the Neuralnomicon, transcends any typified death and/or black metal motifs by seeming to owe some of its credit to Captain Beefheart.  This EP outdoes much of what I've heard from recent progressive metal and post-metal bands, its aggression unrelenting as Orbweaver knocks through time signatures and seamless rhythmic transitions with technical acuity and a fascinatingly psych-candy/monster movie approach to composition.  It's like listening to Carcass cover Frank Zappa's "Cheepnis."

"Crystal Prisms" can be heard right here.  Once again, Earsplit PR is to be thanked for providing info.

Miami psychedelic noise conjurers, ORBWEAVER, are readying the release of their Strange Transmissions from the Neuralnomicon EP. A maniacal journey through modulating realities, the five-track mind eraser was recorded at Miami’s Pinecrust Studios with Jonathan Nunez of Torche at the controls and mixed/mastered with Brian Elliot at Mana Recording Studios (Hate Eternal, Cannibal Corpse, Goatwhore, Exhumed). ORBWEAVER’s tones spiral through the realms of psychedelia, noise, and a warped interpretation of death metal. Fluctuating between these erratic, trance-like elements, the foursome produce an eclectic sonic ruckus reminiscent of a Zappa-esque brand of controlled chaos. Strange Transmissions from the Neuralnomicon will be unleashed August 2nd in a limited run of 100 cassette tapes via Primitive Violence Records and on CD direct through the band.

Fittingly dubbed “deranged, psychedelic death metal hurdling through space at speeds that make The Millennium Falcon look like your little sister’s moped,” by Orlandooom.com and, “a dissonant, warped interpretation of technical death metal, spliced with sheer blasts of chaotic noise and a mangled black-metal influence that claws its way to the surface halfway through,” by Saltyeggs.com, ORBWEAVER was forged in 2010 by guitarist/vocalist Randy Piro (ex-Hate Eternal, Gigan) and drummer Mike Pena. Together they recorded a self-titled, three-song demo. Shortly after, lead guitarist Sally Gates (ex-Gigan) and bassist Jason Ledgard joined the fold. Mike Pena parted ways with the group in 2013, and was replaced by drummer/percussionist Scott Spasiano.

Coinciding with the unveiling of Strange Transmissions from the Neuralnomicon, ORBWEAVER will bring their cosmic pandemonium to the live front on a short run of dates through the Sunshine State. Set to commence at Churchill’s Pub in Miami on August 2nd, the band will twist the sound waves of Orlando, St. Petersburg, Jacksonville and Lake worth with addition dates being scheduled through the Fall.