Has Locrian Ever Left Annihilation? (or, the Perils of Misty Shopping Carts)

In jazz critic Ben Ratliff's book, Coltrane: The Story of a Sound, there's a quote from drummer Rashied Ali that stuck with me long after I'd finished the last page. Toward the end of John Coltrane's life, and as his creative evolution had taken him irretrievably into the throes of structureless free form jazz and the ultimate demonstration of improvisational chaos, he'd begun to pound on his chest and holler into the microphone during live performances. Ali said, "I'd say, 'Trane, man, why are you doing that, beating on your chest and howling into the microphone?' He'd say, 'Man, I can't find nothing else to play on the horn.' He exhausted the saxophone. He couldn't find nothing else to play... he ran out of horn." 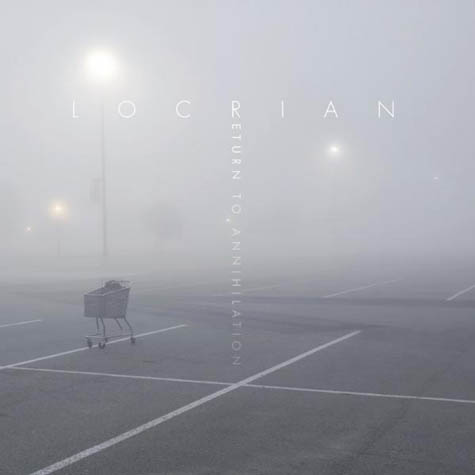 Coltrane passed away in 1967, before this dilemma really led to any noticeable skid in his production as a musician. He remained a prolific artist and his discography is abundant to say the least. But, before I'd read that, it hadn't ever occurred to me that one, especially one who'd essentially let the horn pull him into some strange and dissonant areas sonically, could simply run out of places to go. You have to think that, unless Miles Davis' progressions into jazz fusion informed his future endeavors, Coltrane may have retreated back into his Blue Note or Atlantic output, retreading familiar ground to set him on a potentially new path, or simply for the sake of rebuilding himself so as to knock himself back down again.

(Or, Coltrane would've just learned a new instrument, but that would defeat my point entirely, so let's just ignore that logic altogether.)

The Chicago drone metal act known as Locrian has been sculpting sound for some time now. Having followed the band's progression since their 2009 debut, Drenched Lands, I did wonder at times how the band would prevent themselves from "running out of horn," (or, in their case, "dystopia"), their adeptness at constructing drones and black metal-bastardizations of Eno-ish fields of ambience either too unique to the band to abandon or too broad stylistically to allow any true variation creatively. It was evident with the band's 2011 album, The Clearing, that an instrumental focus was slowly becoming more and more essential to their soundscapes. But, when I heard "Eternal Return," the introductory track to Locrian's new album, Return to Annihilation, I was taken aback by how musical the band had become and how melodic.

As if "Cacophony Outreach" were a thing, Locrian members André Foisy, Terence Hannum and Steven Hess have realized an excellent synthesis of composition with their expansive tonal mutations, breaching "gaze" territory to some extent while continuing to foment an air of intensity. While "Eternal Return" demonstrates a profound accessibility relative to this band, the album's first single, "A Visitation From the Wrath of Heaven," pushes Locrian's want of tension, delicate streams of whining distortion quiver beneath a constant percussive thud and light strings are plucked arbitrarily while an echoing series of tones softly hum. The track's persistence eventually collapses into a heavy barrage of vocalized drones, amplified guitar and hammered cymbals, an emotional outro that contrasts with the track's initial machine-like repetition.

Locrian is a new acquisition for Relapse Records, home to bands like True Widow, Baroness and Black Tusk. In addition to Annihilation being Locrian's breakthrough release, it's also a transitional album meant to enable continued growth. Working within their self-imposed boundaries, drones remain essential to the songwriting, though there’s less of a spatial investment. “Two Moons” is a drone track, but it’s also encumbered by psychedelic guitar licks and a slow march of a drumbeat. The song has rhythm and tone, warmth and soul. Instead of absentia, Annihilation attempts life in terms of action, whether that be cycled machine-like or violently colliding with forces unseen, suggesting near catastrophe in the aftermath of a stream of something perpetual. The title track for instance begins as a ritualized drum track that devolves into layers of running guitar lines and feedback, a melting pour of sonic mud that wallows for an extended period of time until the track shifts into a very lush guitar-driven outro. The following “Exiting the Hall of Vapor and Light” takes a more subtle approach with how repetition works in its effort to build something substantial, its low end peaking about halfway through the track, a gentle pick keeping time with its single pulsating beat while guitar strings are plucked, wandering in and out of earshot as if floating.

“Panorama of Mirrors” is loud and ominous. While distortion slowly singes what little air exists in the track, a kick drum and snare find a way to anchor the frequency of noise and screams, itself not always reliable. While “Panorama of Mirrors” seems mostly aimless, it provides an excellent forerunner to the album’s grand finale, “Obsolete Elegies.”

Locrian’s aforementioned debut album, Drenched Lands, was introduced by a very lonely piece of music titled, “Obsolete Elegy In Effluvia and Dross.” As if to simply expand on an idea that had begun Locrian’s creative development five albums ago, (coming full circle perhaps), the Obsolete Elegy thing is revisited and expanded into a very involved 15+ minute suite. While thematically the track is familiar, the lengths to which its melodic basis is stretched are fascinating. From piano balladry to science fiction tonality, from Sébastien Tellier electronics to discordantly sublime string play, the exploration eventually transitions into urgent tempos and circular guitar soloing that hybridizes industrial propulsion and arena rock braggadocio. It’s so good, and so perfectly summarizes much of what Locrian has accomplished in four years by detailing who they were and who they’ve become as a band, having championed thoughtfully composed chaos and homage-inspired score music, all carefully considered in a metallic haze heavy enough to obscure what’s going on beneath the mire. With Return to Annihilation the band has realized the perfect breakthrough album, one that places high value on identity while smartly allowing its authors to avoid painting themselves into a dark and all-too familiar corner.