- September 25, 2013
Fans of Neu! and 70s jazz fusion will appreciate the rhythmic dialogue happening between the members of CAVE in this track, "Shikaakwa," for which a video has been produced.  Necessarily minimal and repetitious while nuanced with woodwind, keys and strings, "Shikaakwa" is worth the five minutes it takes to listen.  This single is from the band's upcoming new album, Threace, which will be out on October 14 via Drag City. 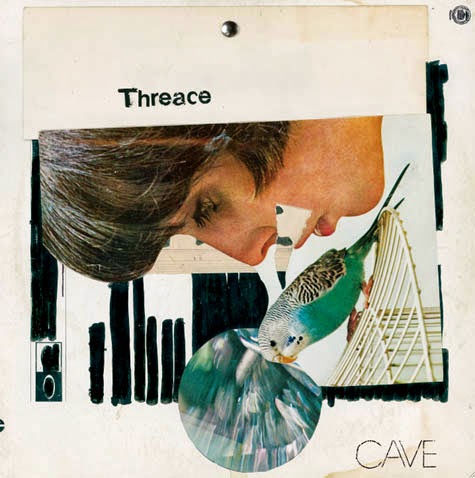 CAVE RELEASE MESMERISING NEW MUSIC VIDEO FOR 'SHIKAAKWA'; AND PREPARE TO PERFORM THEIR NEW ALBUM THREACE ON A BOAT!

Be mesmerised by the latest CAVE video. Watch and share via this direct link: http://youtu.be/eLrofQRFQ6k

CAVE have been honing their form of guitar driven, rhythmic, hypnotic psych/krautrock since 2006, and with each release they have pushed their sound into pastures new. On their new album Threace (Drag City, 14 Oct) the guitars remain heavy and thick to provide the sturdy backbone which is still the driving force of their refined sound, only there are kaleidoscopic smatterings of saxophone and flute also, fleeting blasts of soul-jazz sensation over a new and exciting, rolling funk minimalism.

For Threace, CAVE spent a long time tinkering and tampering in the lab of analogue dissection. The album was half planned and half jammed, using different mic placements, building up from a basic set up of as few mics as possible and utilising a 1" 8-track Scully machine, to cut tape (and realities) together into a metro-musical albumen.

"This music video came as an extension of what we had already established as CAVE's live show over the course of 2013. The style known as 'vector rescanning' or 'raster manipulation' originated with the Rutt-Etra scan processor in 1972. But, with the technology rarely remembered and devices next to impossible to find, we used LZX Industries and Brownshoesonly video synthesizers to 'program' these signals and send them out to a vector monitor where it was then 're-scanned' or filmed off the monitor screen."

As a piece of footage it is utterly mesmerising, which also compliments CAVE's music perfectly.

Additionally, Chicago residents are in for a real treat today, Wednesday 25th September, as between 5 and 7pm local time, CAVE are picking up right where they left off from their live, rogue guerrilla-style flatbed truck performance through the streets of Chicago back in 2011, albeit this time, potentially a lot wetter!

CAVE shall take to the eerie flotsam of the Chicago River in downtown Chicago for a live preview of Threace. Entering the river from the lake at 5PM, CAVE rock their way through the city heading westward, making choice rounds near all the major bridges for maximum impact. Who knows the outcome? Will the band be shut down by the river police? Will the sonic sounds force the river to once again change direction? Only one way to find out- it's sink or swim time for CAVE!

Don't forget you can still watch the Threace teaser video via this direct link - http://bit.ly/16tFeZj