It's likely you'll be missing them for years to come, then. However, Qui is pretty cool and seems to have embraced the same goofy duo dynamic that Ween possessed, sans the overt genre parody. The track "Whateryoudoin'?" takes the group's creative relationship and twists into this this comedic love song addressing the growing romantic tension between them.

The track is featured in their upcoming new album, Life, Water, Living..., will be out in late February.  All info and links are courtesy of Us/Them Group. 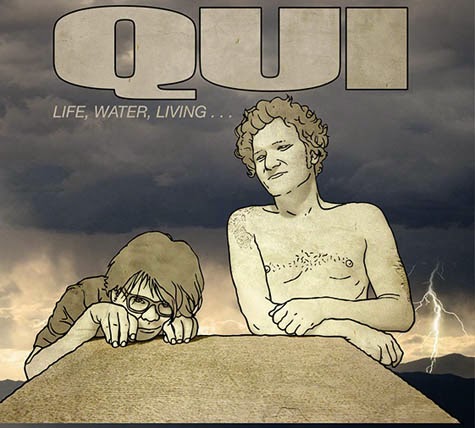 L.A. duo Qui premiere the second video from their forthcoming third album today via SPIN. The clip, for "Whateryadoin?" is available to watch/share HERE.

Hot on the heels of the album release, Qui take to the road with fabled hard rock band Moistboyz (ex-Ween, Mondo Generator) on the west coast. Please see all dates below.

If the third full length by L.A. duo Qui sounds like a radical departure, you probably were never really listening properly in the first place. Sure, perfectly taut vocal harmonies and precise, sparse instrumentation supplants much of the band's early fume-huffing punk-noise here, but their penchant for challenging, button-pushing ideas is stronger than ever. Qui also employed harmonies and experimental structures on their previous album Love's Miracle (2007) with former vocalist David Yow (The Jesus Lizard). But, Life, Water, Living... is clearly the band's most meticulously refined effort at using melody and harmony as subversive weapons.

After a 5-year absence, Qui is once again back to the original duo formed in 2000 by drummer/vocalist Paul Christensen and guitarist/vocalist Matt Cronk. Life, Water, Living... features inventive song structures and warped pop sensibilities reminiscent of early Sparks and Frank Zappa with Queen-style harmonies... or something like if Badfinger were the Melvins. Throughout, it's an album that subtly commands attention as it shifts from a soft whisper to a chuckle to a scream.

Album opener "Kicked Out of Mime College" dares to keep it (deceptively) simple, based primarily around a churning bass riff and soft, but elastic vocal harmonies of Christensen and Cronk, slowly building to rumba percussion breakdowns and a soaring Theremin-like keyboard line. The title track follows with stop and go rhythms as Cronk switches back-and-forth between crunchy power chords and lightly strummed, clean minor chords. Meanwhile, the singers harmonize beautifully, with particularly impressive vocal acrobatics from Christensen (all the more impressive seen live as he pounds on the drums simultaneously). "Mucho Sex in America" takes a revved up ZZ Top boogie riff and stomping drums driven by frantic, paranoid vocals. Elsewhere, tracks like "The Kind of Jazz This Is" and "Awkward Human Interest" employ bossa nova rhythms, cheeky jazz riffs, a cappella passages, light keyboard flourishes and an overall enthusiasm for the unexpected. Life, Water, Living... was produced by renowned engineer Toshi Kasai and Melvins drummer Dale Crover at Entourage Studios in Los Angeles.

Since their first performance in L.A. in early 2001 and the release of their first full-length, Baby Kisses in 2003, Qui (pronounced, "Qui,") maintained a prodigious pace of both local performances and national tours. In late 2006, Qui had the serendipitous good fortune to collaborate with vocalist David Yow of The Jesus Lizard/Scratch Acid fame, first as a guest and eventually as a full-time member. The band soon partnered up with Mike Patton's Ipecac Recordings, for their second full-length entitled, Love's Miracle, which was released on September 11, 2007. With it came a full tour of the US and Canada, followed by a trip to the UK and Europe.

In 2009 Qui was invited to play at the All Tomorrow's Parties festival in Minehead, England, along with Devo, Sleep, HEALTH, Harvey Milk, and for the first time in ten years, The Jesus Lizard. The rest of the year had Yow's calendar full with The Jesus Lizard's highly anticipated reunion tour, during which time Christensen focused on two new musical projects; the rock band, Help, and his staggering country/jazz/bossa nova duo, Paulene.

With no real agenda, Cronk and Christensen spent the better part of a year writing new music. Yow was by then fully engrossed in his new careers as an actor and artist, unable to commit to playing full-time. So, Qui elected to proceed as their original line-up, with future Yow collaborations an imminent possibility, schedules permitting. In July, 2013, Qui released, "Awkward Human Interest," a limited edition spit 7" single with Mike Watt + The Secondmen on ORG Music.

Life, Water, Living... will be available February 25th, 2014 on LP, CD and download in partnership with Cobraside Distribution.