The Mailbox Giveth: The Unsemble 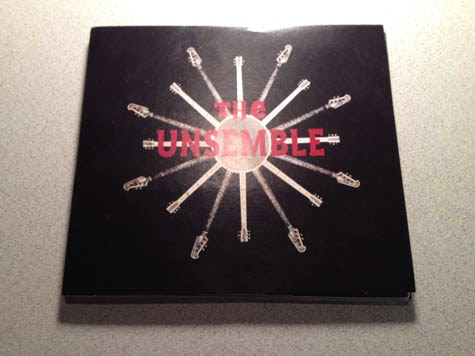 Peaks and valleys and whatever's in between, it could be that a collaboration joining members of some of the strangest and most aggressive acts to exist in the last thirty years builds up expectations to a summit that's impossible to reach.  It could also just be the nature of improvisation, that whatever develops naturally between those involved won't always garner applause or the complete and total sum of a listener's attention or appreciation.  I'll admit that I was convinced I'd fall in love with The Unsemble, whose combination of both composed and improv'd instrumentals resulted in an album that's been growing on me steadily.  And while I've been able to enjoy it more as I've listened, its compositional strengths point out somewhat of a flaw in its making: that when the band isn't working within an established and tangible construct, it seems to fall short in nurturing spur of the moment ideas.

The Unsemble is a trio comprised of Duane Denison (The Jesus Lizard, Tomahawk), Alexander Hacke (Einstürzende Neubauten) and Brian Kotzur (Silver Jews) and this self-titled album documents, for each member, new territory.  For Denison and Hacke especially, the tendency to alienate or corrupt via guitar riffs or aurally corrosive machinery aren't part of the plan.  Instead, the trio realize a vision uniting the play of experimentation while incorporating instrumental passages that are musically sound, though repetitious.  They don't quite take themselves to the level of progressive, nor do they really fiddle with ambient tonalities or erratic noise. Overall, The Unsemble plays with little to no distortion, clean bass riffs when given focus (as in the excellent "Act 3"), melodic keys and rhythms that almost qualify as "catchy."  While "Circles" percussively drops like dead weight on every accent Denison plucks on his guitar, its mood somewhat severe, the song never leaps into some dissonant or highly amplified enclave where heads bang and ears bleed.  Instead, you get sleek funk-driven periods of cool ("Act 3"), noir'ish post-rock of almost the Mogwai variety ("Neon"), quietly rumbling interactions with high strings ("Waves") and sweetly rendered rock music ("Cyclone").  While "Shadows" takes on characteristics better associated with Tomahawk's debut release (s/t, 2001), the volume is still reasonably tied to the rest of the album's composed entries.

The improvisational moments act as pop length interludes, semi-realized interactions that permit the band a looser, more primitive means of expression.  What some of these pieces have going for them, (many of them simply being numbered variations that are less-than-creatively titled "Improv"), is that they do a good job of setting up the album's stronger offerings.  "Krishna," as the album's No Wave Lite introduction, is short and sweet and mostly reveals the type of experimentation The Unsemble pursues throughout the album.  "Improve 1" nicely precedes "Act 3," tom rumblings and aimless sounds enhancing the very direct, bass-driven instrumental.  "Chaingang" rattles as guitar notes are picked, a bass throb resigned to apply some motion.

As the album sequentially relies upon the improv tracks to break up its more composed offerings, it's as if their true purpose is to fill out the album in a very formulaic way, which seems to discount the band's intent to ad-lib musically.  I almost think consolidating the five "Improv" tracks would've been a more interesting approach, creating a centerpiece with which to both anchor The Unsemble's more musical treatments and lighten up the filler.

Having said that, the album, while not consistently cohesive, still boasts enough high marks to be deemed worth a listen.  If nothing else, for fans of The Jesus Lizard, Einstürzende Neubauten and Silver Jews, you get to enjoy a new creative partnership that inspires something other than what you're accustomed to.