- October 02, 2014
Like many, I'd first heard of Sleaford Mods last year as the band's then-new release, Austerity Dogs, was gaining some momentum in the States.  With urgent sounds meeting jagged commentary, the UK duo is one of the more interesting outsider acts to garner attention, enough so that Ipecac Recordings is releasing Chubbed Up +, which is a singles collection.  "Jolly Fucker," one of the tracks featured on the compilation, demonstrates the group's subversive tone as well as their oddly composed backdrop.

Chubbed Up + will be out on October 28th.  All info and links come courtesy of Speakeasy PR.

SLEAFORD MODS RELEASE CHUBBED UP + VIA IPECAC RECORDINGS ON OCT. 28 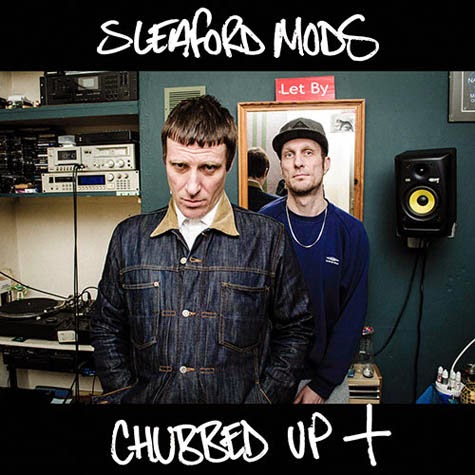 NOV. 29 PERFORMANCE AT THE WICK IN BROOKLYN

SAN FRANCISCO, Sept. 30 – The UK’s Sleaford Mods join Ipecac Recordings’ roster with the Oct. 28 release of Chubbed Up +, a singles collection featuring three previously unreleased songs (“The Committee,” “Bring Out the Canons” and “Fear of Anarchy”.)

“…some of the best music being made in England right now is happening from artists creating a lurid, living portrait of a country that’s not right in its head… Nobody is doing it as explicitly as this duo though, and frankly it’s a pleasure to for once hear music that’s made with such bile, such attack.” -NME

“Sleaford Mods sound like nothing else. Best Band in the land. It’s that simple” – The Quietus

“It isn’t always the role of political music to come up with solutions. But nothing could be more urgent than the questions Sleaford Mods pose.” – The Wire