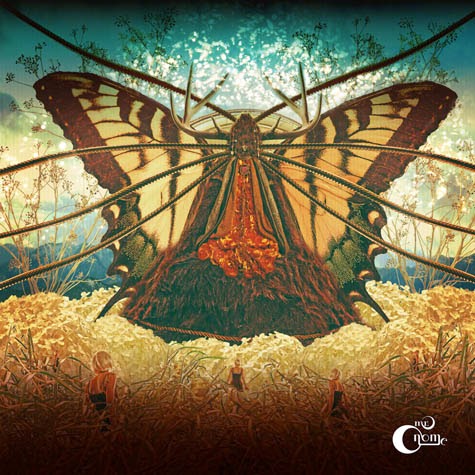 The Heart of a Dark Star, the title of the newest release from Cleveland-based fantasy rock duo, mr. Gnome, apparently owes its title to Neil Gaiman. The phrase was pulled by singer/guitarist Nicole Barille from the book, The Ocean at the End of the Lane, as a metaphor for the type of journey this album details, that is in her words, “the ultimate journey into the unknown.” Within seconds of the band’s intro track, “Melted Rainbow,” its whirring and delicate propulsion spinning through its cycle as keystrokes dance upon its construct, Barille sings, “Because I can’t explain just where we are right now,” summarizing the album’s starry eyes and excited uncertainty without much by way of fear or caution, a sound as free-floating and willing to discorporate as most children when enraptured by tales of wonder.

The work of singer/guitarist Barille and drummer/pianist Sam Meister, mr. Gnome’s visual aesthetic and music-aided fantasies weave color, tempo and texture into an energetic and imaginative storybook that’s surrealistically conceived, with beasts to either run from or slay, seas to explore to their depths and moons to live upon while “waiting for our eyes to bloom.” Capturing childlike vigor or whimsy in a genre largely devoted to cynics like myself, (i.e., all rock’ish things qualified “alt,” “indie,” or “art”) the application of fantastical imagery could be perceived a hard sell initially, despite whatever accolades the group garnered following their debut, 2011’s Madness in Miniature. Couple that with the presence of Barille, whose own vocal styling seems fashioned from the “little girl lost” motif, and an overabundance of distortion-laced awe and you have what is essentially a band that could be marketed for the Disney set though its packaged for adults who may easily translate much of the band’s vision as simply the byproduct of some chemical excursions or possibly an indication of arrested development.

But, then again, how many kid-friendly entertainers would instruct its listeners to “fuck the plan/let’s get high?” Not many, I would guess.

These songs work, though, because they’re mostly enthralling. They happen and, when they do, it’s difficult not to feel lighter, bouncier. If nothing else, mr. Gnome employs a dense array of textural sweetness that’s comparable to ingesting multi-colored sugar, (or in Barille’s words on the album’s opener, “a melted rainbow”). It’s nice on the ear.

Though comparable to Madness in Miniature in terms of its sequential continuity, (interlude-length songs like “Dark Star” and “Folk Lonely” providing means of transition between tracks without cuts), The Heart of a Dark Star is a more immediate and fluid effort, even when mr. Gnome throw in changes or slow things up. It’s rare any song of theirs plays the same throughout. The celebratory and Cramps’ish square dance of “Rise & Shine” takes a minor shift in percussion toward the end. “Star Stealers,” which begins with a high-tempo synthesizer-rich trance rock sound falls into this slowed-up, ethereally charged snare-racket, Barille’s multi-tracked vocal finding various, ghostly pockets throughout the expanse of the track. With its steady distorted strum and propulsive drum sound, “Hangunder,” (probably my favorite track on the album), is an instance where one of the album’s more invigorated offerings remains consistent in terms of structure.

While I can’t say a need for respite from the album’s guitar-heavy overlay becomes necessary at any point, mr. Gnome provide one with their sole ballad and longest track, “Light.” Beginning the second half of the album, “Light” is something of a modern love song, Barille’s melodies and suggestive lyrics evocative of FM fodder to some extent. The track’s production is also characteristically smooth. In context to the rest of the album, ”Light” is kind of an outlier, though it’s not such a stretch that it detracts from its cohesion.  And then the Mariachi flavor of "Storm" also emerges as an oddly shaped addition, though, with volume in mind, it rests nicely within the framework.

Carrying the album to completion, the final riff that closes the even sway of “Follow” is appropriated to fit the multi-vocal harmonizing of “No Place Like Home.” A host of voices comprise the album’s closer, “The Sea” a little over two minutes sung a cappella. It’s a nice, quiet close.

There’s an obviousness to the toy piano in “Mustangs,” (itself an element that’s already run its course thanks to bands like The Dresden Dolls and Psapp), and “Odyssey” plays like some take on Get Behind Me Satan-era White Stripes, (although I love Barille’s solo on this track), but The Heart of a Dark Star is an overall good listen. Loud, melodic and smartly composed, mr. Gnome craft themselves a distinct persona that’s allowed them to grow as songwriters, not to mention as the visual and sonic authors of their own imagined dwelling.