- November 19, 2014
Ben Chasny, Mr. Six Organs of Admittance himself, has gone psych-drone for this latest single, a shrieking and inebriated number called "Wax Chance" that's taking the lead for his upcoming new release, Hexadic.  There's a seasick sway to the bass and drum in this track, Chasny barely audible when he decides to coax a few syllables between any available space that isn't overtaken by his six-string dissonance.  I'm intrigued and already looking forward to hearing Hexadic in early 2015.  It's set to release in February via Drag City. 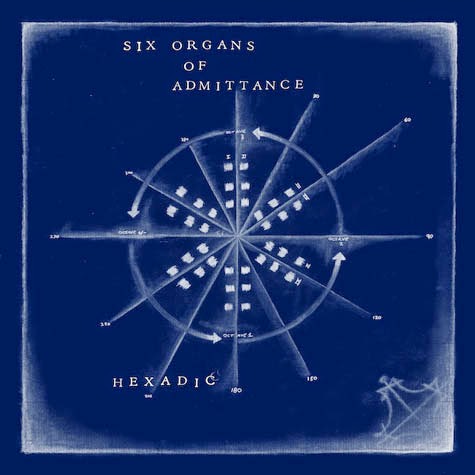 Listen to the track here:

Links and info were provided by Rarely Unable.

Following the recent announcement regarding Hexadic, the upcoming album by Six Organs Of Admittance, much has been made of the new combinatorial system devised by Ben Chasny which spawned it, even though it hasn't yet been fully revealed to the public. Now it is time for the ears of the world to begin to hear the Hexadic sound...

"Wax Chance," is the debut track available for preview, the guitar is dialed up to the breaking point, the vocals squeezed through dimensional wormholes, bass and drums walking with eerie tranquility - but what one really comes away with is the scalar invention explored most evidently during the solo portion of the song. Hexadic processes built the riffs and the lengths of phrases, but they also suggested the scale being played in for every piece on Hexadic - and with "Wax Chance," Ben gets a verse or two in, before setting upon his guitar to run that particular scale raw. Clearly invigorated by new ways of playing, Ben finds sound in places that we don't necessarily hear touched on everyday. Hexadic processes determined the structure of the lyrics as well, coming up with a series of initial letters from which Ben hangs our all-too-human words. This interaction between the system and the soul produces music that is entirely an expression of Six Organs of Admittance - the system simply facilitates and guides the expression. Additionally, the Hexadic song structure allows the rhythm section to explode with Ben at suggested measures that supplies a linear punch to the proceedings. If that doesn't describe adequately what you think you're hearing on "Wax Chance," we'll spell it out for you: R-O-C-K.