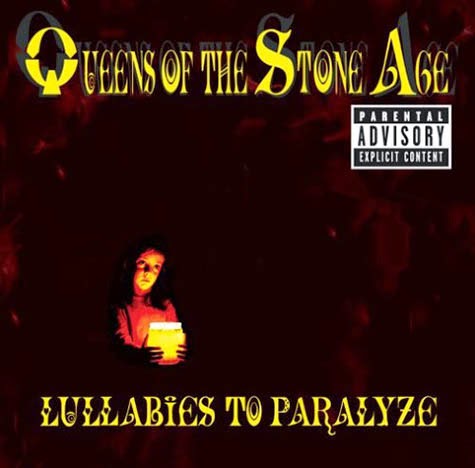 A little over a week ago, Lullabies to Paralyze, the fourth album from Queens of the Stone Age, turned 10.  Realizing that this particular volume of QOTSA's output doesn't necessarily garner the respect of its predecessors, 2000's Rated R and 2002's monumental Songs for the Deaf, Lullabies to Paralyze was, for me, an important album, one that occupied a great deal of my time and consideration for months following its release.

Remembering 2005, as I saw it, The Strokes and The White Stripes were supplying rock journalists with all the content they required.  Garage was retro-chic and vintage blues was the shit.  While QOTSA's Songs for the Deaf had earned itself some very well-deserved acclaim, (aided in part by the star power and involvement of Dave Grohl), Elephant and Room on Fire, both of which were the 2003 follow-ups to milestone releases for both The Strokes and The Stripes, had seemingly erased the album from memory.

(Once again, this is just how I saw it.)

And while I appreciated Elephant and the lengths to which Jack White was bringing Detroit and blues rock back into the spotlight, Josh Homme represented something I'd not really heard before in mainstream rock n' roll, pop basics dialed the fuck up to some strange other world wherein melodic abstractions could resonate with a mainstream audience and somehow appeal to crowds that had grown attune to sensibilities more closely akin to those of the underground.  Queens of the Stone Age was a revolving door, a concept that encouraged the utopian notion of the creative community, enabling artists to exchange ideas and contribute to an overall conversation that would eventually grow into something unpredictable.  With a core of established performers at the helm, namely Homme, bassist Nick Oliveri and ex-Screaming Trees vocalist Mark Lanegan, QOTSA built something musically distinct that had managed to grow throughout three albums.  This concept also bore fruit via Homme's Desert Sessions, which were communal recording sessions held at the Palm Desert studio, Rancho De La Luna.

Following Songs for the Deaf, Homme released the 9th and 10th volumes of his Desert Sessions series (I See You Hearin' Me/I Heart Disco which featured PJ Harvey) and played drums for Eagles of Death Metal's 2004 debut, Please Love Death Metal.  In the meantime, Oliveri had been suddenly dismissed from QOTSA and rumors had circulated that Lanegan was also no longer part of the group, (which was false).  With Oliveri gone, however, the wilder, more dangerous element of the band's make-up would be lost.  So, how would Homme compensate?

With Lullabies to Paralyze, Homme had a lot to prove.  As it was the band's core components were now down to one essential player, so it was unlikely that QOTSA's fourth installment would be the ensemble-level effort of its predecessor(s).  However, as the mechanics of the album were relatively spare, there's a level of instrumentation to Lullabies that's of considerable weight, a density that, while not the overt riff-spew that surged through SFTD, reveals itself through a darker, more slowly intensified articulation.  Much of the group's signature wit and nuance remained.  And while Lanegan showed up here and there, most notably in the album's intro track, "This Lullaby," Homme's modified approach made use of a new core of musicians: Alain Johannes, Troy Van Leeuwen and Joey Castillo.

The first single from Lullabies was "Little Sister," which lessened some of my worry as I was one of many whose anticipation of the album was unfairly laced with high expectations.  Quick tempo, slick melody, awesome hook, it was obvious that Homme's vision was still intact.  But, there was the question of how intact the album would be.  I acquired a copy of the album shortly after its release, (the 2-disc limited edition version with the DVD), and wasn't all that thrilled with "Medication," which at the time seemed like shot-level filler, sort of a quick-to-the-point and simple second track meant to bring home that QOTSA still thrived on Stooges-inspired repetition and sleek guitar sounds.  "Everybody Knows That You're Insane," however, with that howling lapsteel and abrupt transition into the hook, grabbed me immediately.  There's a section at the bridge where its almost like the rhythm drags and falters, regaining composure just in time for Homme's solo and picking up stride just before heading back into the last hook.  And "Tangled Up In Plaid" remains one of the my favorite QOTSA tracks, a carnival'esque dance that heads into a deep rhythmic stride accented by the tap of a triangle.  I've always loved the choral section of this track, that driving riff elevating the song's intensity, a mud-encumbered melody.

Another of the album's singles, "Burn the Witch," features guitar work from ZZ-Top's Billy Gibbons, certainly one of the more notable collaborators to participate in a QOTSA album.  While perhaps not to the level of The White Stripes' "Seven Nation Army," the bass riff that drives "Burn the Witch" wears a similar distinction.  Lanegan sings lead on a cover of ZZ-Top's "Precious & Grace," which showed up as a bonus track on other editions of Lullabies.  "In My Head" had originally shown up on the aforementioned Desert Sessions 9 & 10, strong enough to rework and include.

Listening to the album now, I still feel that it suffers from a sequencing issue, its first half weighed down with singles.  Following the slowed-up balladry of "I Never Came," the album enjoys some less accessible moments with the oddly mesmerizing "Someone's In The Wolf," texturally meditative "The Blood Is Love" and "Skin On Skin," whose outward and commanding sexual sway compliments Homme's turgid falsetto like the hard-on that's driving him to sing it in the first place.  A zipper's loosed and a grunt is exhaled before "Broken Box," another repetitious guitar number in the evil woman tradition, possibly tries a little too hard with its "take that broken pussy elsewhere" line.

And, because sexuality seems to inform this block of songs, the sultry "You Got A Killer Scene There, Man..." adds some feminine presence to the album with Brody Dalle (Homme's wife) and Shirley Manson providing backing vocals.  It's not really worth noting that Jack Black provides claps, but he does.  The groove is deep, the guitar a mere accent.

Ending with the lush "Long Slow Goodbye," Homme's Lullabies goes out on a passionate number, closing out what was a new era for the band creatively.  While my initial listen was met with some disappointment overall, it was obvious that this was a grower and deserved more than just a few spins to fully appreciate it.  I just needed to listen more closely.  In some ways, I actually find Lullabies more successful than either Rated R or Songs For The Deaf in that it stands as a testament to self-actualization and makes a case for moving forward.  Lullabies could've been a retread.  Instead, Homme saw an opportunity.  And while this opportunity did result in a generally well-received album, it's a pity that it's overlooked.  Ten years later, I haven't heard a word.  Have you?

Sincerely,
Letters From A Tapehead
00s over the hill queens of the stone age rock