What I Heard This Morning: Kohoutek 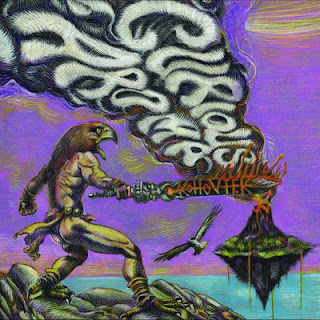 I was listening to Kohoutek's Curious Aroma this morning, a mostly free form improvisational piece consisting of two lengthy tracks.  Each track, (dubbed "Part I" and "Part II"), sound based in some personal, meditative journey that (to me) convey realization as opposed to discovery, awareness vs. epiphany.  There's no sudden "eureka;" no predictable or pandering utilization of pay off.  Instead, you're allowed to get lost in its wandering make-up until its overall size becomes known, which is a very gradual process.  "Part I," for instance, reminds me somewhat of "He Loved Him Madly" by Miles Davis, itself a thirty-something minute meditation on the life of Duke Ellington, a free moving establishment of expanse through lost tones and sounds that culminate into a soft rhythmic outro.  By contrast, Kohoutek keeps it loose, opting instead to introduce a buzzing thread from a guitar that runs over the continual play of feedback and mingling guitar strokes.

For "Part II," however, the mood becomes more dire, the environment a little more stressed.  Random percussion, (with what sounds like an assortment of bottles, pots, cymbals and chimes), adds an already erratic anti-rhythm to an answering group of guitar abstractions.  Eventually, though, the snare drum is found, a stride is gained and experimentalism turns rock n' roll, howling riffs and soloing bleed into each other.  Now, you have an acid jam, which will undergo a few shifts in tempo and carry you through its 24-minute run time.

As Kohoutek have crafted what I consider to be an ambient-improv rock album for jazz heads, I could see fans of Acid Mother's Temple, Bong, Sun Ra's Solar Myth Approach work and Miles Davis' electric period (which bred the aforementioned "He Loved Him Madly" from the Get Up With It LP) digging something like Curious Aroma, though I find it more of an outlet for free form weirdness than volume.  Enjoyable overall.

Curious Aroma will be released 11.6, limited to 350 copies.  I unfortunately have no excerpts to post.  Click here for more info.