A new noise jam from Wolf Eyes has surfaced following news of an upcoming release, I Am A Problem: Mind In Pieces.  The album will be out October 30th via Third Man Records and the single, (which you can sample below courtesy of Force Field PR), is “T.O.D.D.,” named for musique concrète composer Tod Dockstader, who passed away earlier this year.  It’s a fairly sinister mix, a snare and/or tom additive occasionally tapped overtop waves of shrill guitar sound, electronics and cycled percussion.  There’s certainly an air of dread to be found.

Info on the release can be found below along with news regarding their involvement with the Trip Metal Fest and some archival releases being issued via Bandcamp.

I Am A Problem: Mind In Pieces out October 30 via Third Man Records

Post-industrial/noise group Wolf Eyes have signed to Third Man Records, and are set to release their new album 'I Am A Problem: Mind In Pieces' on October 30. This week the band shares album track "T.O.D.D.", named after Tod Dockstader, Musique Concrete composer who passed during the album's recording. Stream the track over at NPR and on SoundCloud.

This week also marks the announcement of Trip Metal Fest, an electronic music festival taking place in Detroit on Memorial Day weekend 2016 curated by Wolf Eyes' Nate Young. The festival will showcase electronic music in all its different forms: experimental, industrial, funk, punk, techno and more. More information will be made available here.

Today Wolf Eyes released yet another batch of rarities via Bandcamp. The band is reaching into their vast back-catalogue and releasing five rare digital reissues every month. More info here.

I Am A Problem: Mind In Pieces

Like it or not: problems are everywhere: waiting dormant under your bed, writhing in the dust in your basement, within the nagging insistence creeping along the cobwebs of your mind growing stronger with every day you forget about them. Problems are at the Wailing Wall - problems are amplified LOUD in a rotten warehouse providing electronic mayhem to Satanic Unveilings: Local and Unlocal. They are the kids in the empty streets in the late august summers with nothing to do but let the antisocial damage fester in their boiling brains. They are the millions of spiders deep in the oceans looking for metal fallen from the skies. They all have one common thread of DNA sprinting thru their misift cells: the soundtrack of WOLF EYES "I AM A PROBLEM."

What is this audio social dissent? Its the newest and hardest-polished latest link in the long chain that locks Bo Diddely inside his homemade nuclear fallout bunker. Its Detroit-Michigan's trio of Nathan Young, John Olson, & James Baljo's trim and s.h.a.r.p follow up to 2013's NO ANSWER: LOWER FLOORS but now the floors are at their lowest point into the mire but strengthend to its strongest foundation of six tracks of uber-sustained moods from the downtown- lights seen thru rotten eyes of the opening track "Catching the Rich Train" to the closer eight minute frozen daylight - draining downer of "Cynthia Vortex." Inbetween these detailed sonic problems you have to climb a "ENEMY LADDER", run from the creature gang known only as the "ASBESTOS YOUTH" only to come face to grim face with the menace only humanly known as "T.O.D.D." The journey will twist and turn into all sorts from-scratch music tuneage which will leave both of your ears juggling with nothing but a concise PROBLEM to deal with: and your mind will be spilled across the sun-soaked concrete slab- jigsaw style IN PIECES.

Wolf Eyes history stretches from 97-to present with over 500 releases into the either of the musical world: with units only normal instrument being a lone GUITAR thru the years: give and take some gongs and blues harmonica,: strings here put thru a John Cipollina- in year 2098 live thru a drag strip filter fuzz -damage direct from Jim Baljo. Nathan Young provides vox & electronics from a woods possessed by a spirit thats both too ancient and too futuristic to gain comfort in its own proto- rural/urban musical environment. Final member John Olson rounds out the soundscape with electronics and woodwinds whose only job title can be known as conjuring "the gut of un-nameable menace" into sound. Here on I AM PROBLEM : the trio are at their peak: relaxed but knife-focused : not a second is wasted on the streamlined atmosphere of scruffy scotch tape-electronics musique' concrete foundation of splatter used to raise up a monument of individualism and idiosyncratic homemade misfired dribbling ROCK AND ROLL: again from the year 2098, with a new messed up misconfigured FACE.

In conclusion: I suggest you sit back, empty your brain gels: and let this PROBLEM sink/rip/boil into your blood stream and witness the WOLF sound molecules fight their rugged way into your world-view/ personal vision and follow the dissonance to the streets to fight your own lone revolution, from scratch: at day one with YOUR MIND IN PIECES. 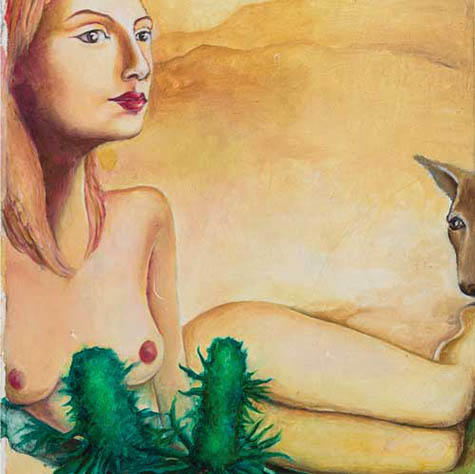