"Sleepy Dog" is a new single from Wand's recently released third album, 1,000 Days, which arrived mere months after their 2nd, the In The Red released Golem.  "Sleepy Dog" premiered via SPIN, a gently psych-influenced synth rock track, very melodic and almost camped up like the theremin-driven score from some antiquated science fiction soundtrack.

Links, info and tour dates were provided by Mutante Inc. and Drag City.  No Philly dates, by the way. 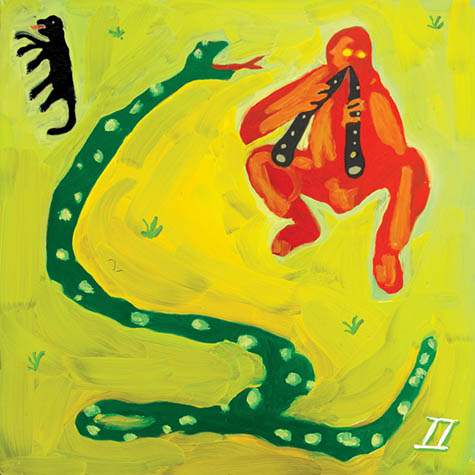 WHAT DREAMS MAY COME OF WAND'S SLEEPY DOG
1000 Days are upon you! With just a fortnight or so before their American tour unfurls in the name of all that is new and true, Wand have something ELSE for you to look at, too! For their soarching and scorching deep-album cut "Sleepy Dog," they've turned to Meghan Tryon and Garrett Davis for something to accompany their tune - a toon of its own, as it transpires. But def the kind of toon you only see in your mind's high, a technicolor black-and white extravaganza that tells the tale of the song-dog with the creeping humor that we'd expect from Python's 21st century flying circus, wherever it may be. This extraordinary video is a refined sensory explosion buzzing with life before and BETWEEN your eyes, flighting sparks to your optic nerves from all sides! "Sleepy Dog" (the video) revels in the hallucinatory synthetic animation of worlds unknown - and yet somewhat slightly familiar to our collective unconscious.

The turning paranoia, hi-fi noises, the visual supernova....does the nice dog exist, or does it represent something....BIGGER? A dreamlike broadcast for you to either celebrate or flee from, with your lives intact. Until the live dates begin in all their literal splendor, the Wand-world of 1000 Days is only in your mind, and only just begun! So come on, "Sleepy Dog"; dream tight and watch the video over on SPIN right now!

Wand's EPIC North American tour kicks off later this month, check out the dates below and follow the morning rainbow!